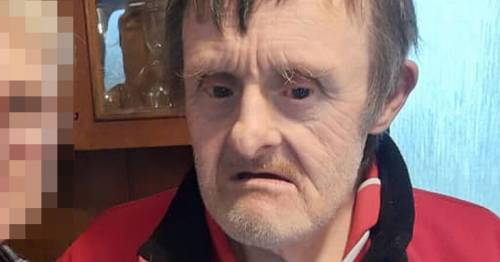 A neighbour said a man bled to death after being mauled by three dogs.

John William Jones, 68, has been named as the man who died in the attack in Lampeter, Wales, on Monday.

A woman has been arrested on suspicion of being in charge of a dangerously out of control dog and a police probe is now underway.

Police found Mr Jones, who had Down's syndrome, covered in blood with a woman crying on the doorstep of the property.

A police source said the animals involved were believed to be British bulldog-type dogs.

The victim was said to have been visiting the home at the time of the attack.

A neighbour said: "The street was filled with police cars – I've never seen so many in this town. There was blue flashing lights all night.

"We've heard that her dogs attacked the man in the house and that he bled to death later. It is just terrible."

Mr Jones was taken from the house in North Road, Lampeter, by ambulance but was pronounced dead later.

A woman was taken away from the house by police investigating the tragedy.

Another neighbour said: "She has lived her for about three and four years and is always out with her dogs.

"I think they are cross-breeds and she is often walking them on the park and rugby club across the road.

"She always seemed very responsible with them although three dogs are not easy to handle for a young girl like that.

"She is a bit of a hippie type but very well-meaning and I know she did some fundraising for the local ambulance service. Lord only knows what went on in that house.

"But she was on the doorstep sobbing and crying later.”

A spokesman for Dyfed-Powys Police said: “We are currently investigating the circumstances surrounding the death of a man at a property in Lampeter.

" Dyfed-Powys Police officers were called just after 5.00pm, Monday, 10th January 2022, to a report that a man had been bitten by dogs resident within the household.

Officers said a woman was arrested on suspicion of being in charge of a dog dangerously out of control.

She has been released under investigation pending further police enquiries.

A police spokesman said: "The three dogs involved did not fall under the Dangerous Dogs Act 1991 and have been removed from the property.”

Lampeter Deputy Mayor Helen Thomas said: "It is terrible tragedy. It has been a shock to us all in the community and the police are keeping us informed."

The attack happened at a private house just yards from Lampeter rugby club at the heart of the town.

Club Secretary Gary Davies said: "There were police cars there all night. It is a terrible tragedy for everyone involved and our thoughts are with them."

A post mortem examination is due to be carried out to establish the cause of death.

An inquest into the death has been adjourned pending further inquiries by Ceredigion coroner Peter Brunton.