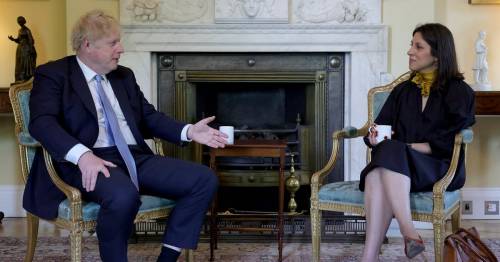 Boris Johnson has met Nazanin Zaghari-Ratcliffe for the first time since she was released from Iran – but he didn't apologise for his handling of her case.

It is the first time the British-Iranian mum has come face to face with Mr Johnson, who was one of five Foreign Secretaries to come and go during her six year detention in Tehran.

Mr Johnson was widely criticised for wrongly telling MPs in 2017 that she had been teaching journalism, which was credited with complicating her legal case.

Ms Zaghari-Ratcliffe was detained by the Iranian Revolutionary Guard on trumped up national security charges in 2016 after a holiday to introduce her young daughter Gabriella to her parents.

She was finally freed in March alongside fellow Brit Anousheh Ashouri after intensive behind-the-scenes talks.

Nazanin Zaghari-Ratcliffe (L), her daughter Gabriella (R) and her husband Richard Ratcliffe outside No 10 Downing Street
(

Ms Zaghari-Ratcliffe arrived at Downing Street at lunchtime with her daughter Gabriella, 7, and her husband Richard, who campaigned tirelessly for her release.

Mr Ratcliffe told journalists afterwards that she raised the PM's journalism comments with him during the hour-long meeting in Downing Street.

He said his wife told the PM that "I lived with that phrase and of course it was a mistake but it lingered".

Asked if the PM apologised for his gaffe, Mr Ratcliffe said: "Not explicitly".

Ms Zaghari-Ratcliffe arrived at Downing Street at lunchtime with her daughter Gabriella, 7, and her husband Richard
(

Labour MP Tulip Siddiq, who has campaigned for her release, said Mr Johnson looked "quite shocked" when she told him she had lived in the "shadow of his words" for "the best part of four-and-a-half years".

She said: "I was really proud of Nazanin. She was sitting next to the Prime Minister, and she told him very clearly and categorically that his words had had a big impact on her and that she had lived in the shadow of his words for the best part of four-and-a-half years.

"I have to say the Prime Minister looked quite shocked, I think, when she said that, but I was really proud she did say that because she wanted to make it clear to him that she's happy now, she's grateful, she appreciates the fact that she is home now, but there was a time when the words had a big impact."

Ahead of the meeting, Boris Johnson's spokesman was asked if he would apologise to Ms Zaghari-Ratcliffe.

The spokesman said: "It's important to remember that it was the Iranian government who were responsible for her unfair detention."

Mr Johnson apologised for his mistake back in 2017, telling MPs: " I apologise for the distress and anguish caused to Ms Zaghari-Ratcliffe and her family."

Ms Zaghari-Ratcliffe was finally released after lengthy negotiations with the Iranian Government, with help from the Gulf state of Oman.

A key stumbling block was a 40-year row over Britain's sale of tanks to the Shah of Iran in the 1970s.

The UK refused to send the tanks after the Iranian revolution, when the Shah was overthrown.

Britain paid the £394 million debt in March, which appeared to unlock the process and allowed the release of Ms Zaghari-Ratcliffe and Mr Ashouri, who had been detained in 2017.