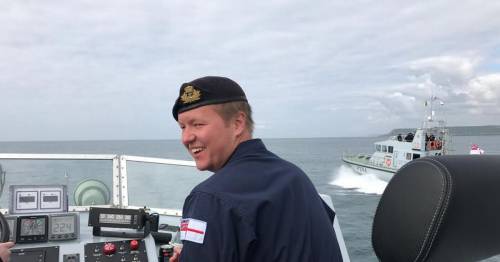 The Royal Navy officer who led a campaign for the military to treat those living with HIV no differently to colleagues tpday spoke of his pride at getting the law changed.

Lieutenant Commander Oli Brown, 30, who is HIV positive, pushed for the policy change after being told he would be medically downgraded, even though he was taking suppressive treatment and has no detectable virus.

From today recruits with HIV who are taking pre-exposure prophylaxis medication to prevent infection may join the armed forces and deploy on operations. Serving HIV-positive personnel will be declared fully fit.

The historic restriction lift means the UK is the second country in the world after South Africa to update its rules in line with medical progress in HIV.

Oli, who joined the Navy aged 19 and quickly rose through the ranks, was discovered to have HIV by chance after a bicycle ­accident in 2019 led to a blood test.

He said: “It was a shock. The three questions I asked myself were, what’s my life going to be like?

“When will I die? And do I still have a job?

“The first two questions were quickly answered. I’ll take one tablet a day, and I can’t pass it on. HIV doesn’t limit your life in the sense of length or lifestyle.” But once he told colleagues, the Navy downgraded him as unfit for foreign deployments.

Oli, who joined the Navy aged 19 and quickly rose through the ranks, was discovered to have HIV by chance
(

Oli said: “I had the stigma of HIV, and of being limited-deployable. It made me feel like I couldn’t do my job, even though I knew that wasn’t the case.

“Every time I went into my cabin I’d sit staring at the walls, crying in distress. I was downgraded with depression and anxiety and sent home on sick leave.”

After counselling from the Terrence Higgins Trust, Oli decided to campaign to challenge the military’s ban on HIV- ­positive people joining the armed forces.

The Ministry of Defence announced the rule change last year on December 1, World AIDS Day, and the restrictions go from today.

Oli says: “From today, I can be considered fully fit for the first time since I told them about my diagnosis.

“The biggest thing is no one else will feel how I did.

“The message is loud and clear, people living with HIV are not limited.”

She said: “This is an important day which shows how far we have come over 40 years.

“The changes reflect the reality that there is no reason why people living with HIV shouldn’t serve in our forces.”