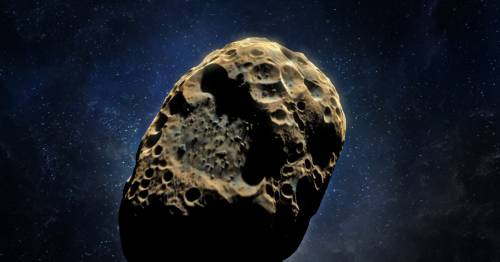 NASA is tracking an asteroid moving past Earth bigger than any building on our planet.

Experts believe the asteroid will shoot past our planet around 1.2million miles away.

NASA said: "Near-Earth #asteroid 1994 PC1 (~1 km wide) is very well known and has been studied for decades by our #PlanetaryDefense experts.

Nasa's Center for Near Earth Object Studies (CNEOS) said on its website: "Potentially Hazardous Asteroids (PHAs) are currently defined based on parameters that measure the asteroid’s potential to make threatening close approaches to the Earth."

An image mosaic of the asteroid Eros
(

Nasa is currently looking into defence methods against any asteroids with potential to stray too close to earth and recently launched its Double Asteroid Redirection Test (DART) mission.

Nasa said : "DART is the first-ever mission dedicated to investigating and demonstrating one method of asteroid deflection by changing an asteroid’s motion in space through kinetic impact."

The rock, dubbed Asteroid 2013 YD48 by NASA, came within 3.48million miles of our planet as it soared through space.

Despite its impressive size, it was slightly too small to be considered a potentially hazardous object – a name given to space junk discovered by the space agency that could prove a threat.

Previous : Dallas Cowboys reach new deal with VP Will McClay
Next : Family launch desperate search for baby given up for adoption 50 years ago