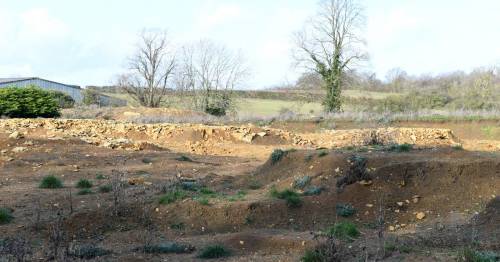 Eighty skeletons buried with their hands tied may have been thrown into their mass grave during the Middle Ages.

Scientists have been trying to pinpoint when the 80 skeletons lived after they were found beneath a building site on West End Farm, Buckingham in early 2020.

Theories circulating last year suggested the bodies could be traced as far back as the Roman times, or as recently as the 18th Century.

But, the discovery of two medieval belt buckles among the remains suggest the bones may have lived during the Medieval period.

Experts have the remains stored away in boxes in preparation of radiocarbon-dating which will pinpoint a more precise time period.

At a Buckingham council meeting on Monday, Council Deputy Leader Gareth Williams said: "Between 70 and 80 irregular burials were excavated, some singular and others multiple, with some of the skeletons appearing to be face down with their hands behind their backs.

Though most experts agreed the bones had been there for centuries, there were several different theories for the age of the bones.

Some said they could have been chucked in the grave during the Anglo Saxon period, while others thought their bound hands suggested they were 18th Century criminals buried after being hung at the gallows.

The bodies – some of which had hands tied behind them and others facing down into the dirt – were found in a mass burial pit and not in an "organised" cemetery.

The positioning of the bodies was also contrary to the way Christian burials were laid out.

The haul was found in early 2020 during work ahead of plans to convert the site into a 72-bed care home.

Archaeologists had planned to radiocarbon-date the bodies to determine the precise date they were alive.

But, a funding dispute between Network Archaeology and Brio Homes, who developed the site, means the report may never be published.

Brio Homes have decided to pull out of excavating the site, so they no longer have any interest in "funding the post-excavation works", the councillor said.

Councillor Robin Stutchbury, who has maintained a personal interest in the report, urged the council to find another way of funding the scientists – who currently have the skeletons stored in boxes.

The news of the belt buckles was made public on Monday, and there were no other precious items found at the West End Farm site in Buckingham, reports say.

Archaeologists quickly removed the remains before treasure hunters could sift through the dirt.

Cllr Robin Stuchbury previously called for Buckinghamshire Council to prepare an interim report to clarify "what took place and in what date period for local residents".

He said: "As you are aware a number of bodies were uncovered during excavations ahead of work at West End Farm, on Brackley Road in Buckingham for a planned care home.

"This included skeletons of 80 bodies with hands tied behind their backs.

"I would be grateful if the Cabinet Member for Planning and Regeneration could provide an interim report of the basic analysis of this major historic site to provide clarification of what took place and in what date period for local residents.

"I understand that some of the investigations have been halted due to financial issues between the developer and Network Archaeology, which have been ongoing for some considerable time, and if this is the case what action can be taken by the Council to bring this to a quick resolution?"

Historian Ed Grimsdale previously told the BBC he believed the skeletons were Anglo-Saxon and it could be "one of the biggest finds" of its kind.

Mr Grimsdale, a historian for Buckingham Old Gaol Museum and the Buckingham Society, said: "This is potentially the biggest find of executed prisoners in the whole of the South of England in Anglo-Saxon times."

Previous : McKayla Maroney’s gut-wrenching statement to Congress about FBI’s handling of Nassar abuse
Next : Gran’s dream wedding in jeopardy in row over casino paying out £5,000 winnings