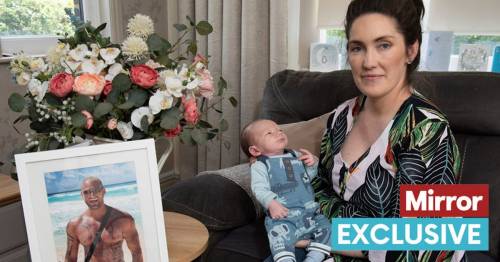 Lauren McGregor cradles her baby – born two years after his dad passed away.

The 33-year-old conceived via IVF using sperm frozen by her husband Chris, who died of a brain tumour aged 37.

She said: “As soon as Seb was born, I had an overwhelming feeling that Chris had passed him on to me from another place.

“When the doctors in the theatre found out my circumstances, they let me put a picture of Chris up and they allowed me to keep on my wedding ring and a necklace with Chris’s ashes in.

“That meant the world to me. One of the first things Seb did was grab hold of the necklace of Chris’s ashes, which was just beautiful.

“The staff were amazing, they were really understanding.”

Today, on Father’s Day, she plans to remember the good times with Seb and Chris’s son Wade, 18, from a past relationship.

“We want to make a list of all of Chris’ favourite places and start a tradition of going to a new one every Father’s Day – just the three of us,” she said.

Lauren, a party planner, and Chris, a forklift driver, had known each other since they were youngsters and got together in 2013.

That was just months before he started to fall ill.

He recovered after an operation in 2014 but tumours returned and he died in July 2020.

The baby was born two years after his dad died
(

The couple had always wanted kids and, during his illness, Chris froze his sperm.

Seb was born on May 17 by planned Caesarian, weighing 8lb 11oz, at Liverpool Women’s Hospital.

“It’s no surprise he was big, as Chris was tall,” said Lauren. “As his features start to emerge, I can see Chris in him more and more.

“Losing Chris was the worst day of my life but he’s managed to make sure that we can keep our love growing even now he’s not here any more.”

Lauren has four other frozen embryos and has not ruled out giving Seb younger siblings.

Lauren and Chris in hospital
(

She added: “I do think once Seb gets to three or four that this is something I’d consider again.

“I suffered really badly with nausea and sickness with this pregnancy, and I said to a friend to never let me do this again!

“But once that is past, you get excited for everything to come, like any mum does.”

Previous : Man’s symptoms dismissed as anxiety after debilitating chest pain given deadly diagnosis
Next : ‘The Only Way Is Ethics: Who will advise Boris Johnson now?’ – Fleet Street Fox