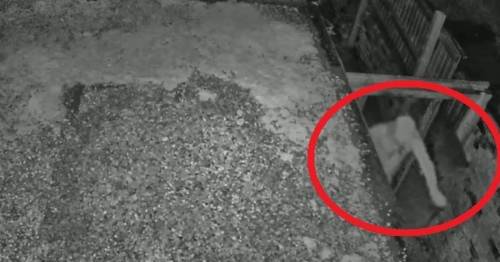 A mum has recalled the terrifying moment she woke up to find a masked man standing over her bed with a machete in his hand.

Rebekka Mohammed, 45, screamed at the top of her lungs, causing the man to retreat from the room and flee the property through the garden, reported Hull Live.

Her petrified daughter called 999 and hid inside a cupboard, believing that her mum was being murdered.

It is alleged that two men entered Ms Mohammed's property at around 12.15am on Wednesday, June 8.

Incredibly, part of the incident was caught on CCTV and the screams of the panic-stricken mum could be heard on the recording.

One of the intruders captured on CCTV
(

Ms Mohammed said: "I decided to go to bed early that night as I was tired from work. My daughter had stayed up to finish her homework and just after midnight I heard some thudding coming from downstairs and then running.

"I knew it wasn't my daughter. My heart was racing and then I heard men's voices. When I opened my eyes, there was someone stood over me holding a weapon that I thought was a machete. He had a balaclava on he was dressed in black.

"I went into a screaming panic. I was that loud that he ran down the stairs when I started banging on the window for help. I ran to my daughter's room to check she was okay and she had stayed quiet, thinking I was being stabbed to death.

"Very bravely, she got into the cupboard in her room and called the police from there who came shortly afterwards. I flung open her window and started screaming for help again as I wasn't sure if they were still in the house or not. The neighbours came to the house and said they'd come in, but I told them not to as I didn't know if the men were still inside."

Ms Mohammed said that armed police arrived on the scene shortly after her daughter called the police.

Nothing had been taken from the house and Ms Mohammed is still unclear as to why the men entered her property.

She said she is filled with gratitude for those who helped her during and after the terrifying ordeal.

"I'd just like to thank all my neighbours and everyone who has sent us a kind message," she said. "I've never screamed that loud in my life so thank you to those that came to our aid after hearing it."

Humberside Police is investigating the incident and is urging anyone with information to come forward.

A spokesperson said: "Upon attending officers, including our dogs and firearms team carried out a thorough search as well using a drone to scope the area however no suspects were located. Nobody was injured as a result of the incident, but the residents have understandably been left shaken."

Lead investigator Detective Sergeant Terry Mellors said: “I understand an incident of this nature is likely to cause fear and concern amongst the local community. Nobody should feel unsafe in their own home.

“I would like to reassure residents that officers from our local policing team continue to patrol the area, if you see them and have any concerns, please come and speak to them.

"We are now appealing for anybody with any information about the incident, that has not already spoken to us, is asked to call our non-emergency 101 line quoting log 7 of 8 June. Alternatively, you can report information anonymously via the independent charity Crimestoppers by calling 0800 555 111."

Previous : Car ‘loses control’ and ploughs into house as crash leaves two in hospital
Next : Dog among 56 found in faeces filed house of horror after being left without water – World News