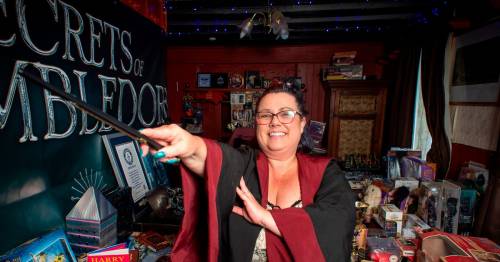 Tracey holds the Guinness World Record for the largest collection of Harry Potter memorabilia. She lives in Pentwyn, Wales, with her husband Martin.

My back aches as I cradle my baby bump and ease onto the sofa, a copy of Harry Potter And The Philosopher’s Stone by JK Rowling flopping onto the cushion beside me. It’s 2002 and I’m weeks away from giving birth to my little boy Brendan.

It’s my second attempt at the magical novel – dyslexia makes reading tricky – but I have time on my side. My steaming cuppa goes cold as I absorb page after page. My imagination runs wild with wizards, witches and a little boy with a lightning bolt scar on his head. Just like that, I’ve fallen in love.

I was a latecomer to the wizarding world of Harry Potter. The first book came out five years before I laid eyes on it. But the stories mean much more to me than a little magic.

In 2005, my first husband, Simon, passed away. He bought me the first book and helped to kick-start my passion for the spellbinding series.

Simon was born with a hole in his heart and suffered with complications as an adult. Doctors treated him for asthma – his symptoms like breathlessness and wheezing were very similar – but they were wrong.

On the day he died we were told he had wind. His heart failed and I was devastated and alone with our boy, who was just three at the time.

Before Simon died, he pre-ordered Harry Potter And The Goblet Of Fire for me. That book was the last present he gave me and I’ll treasure it forever.

Tracey with her world record certificate
(

When I was pregnant, Harry Potter sweets were sold in supermarkets. Craving sugar, I’d walk to the local shop and stock up on chocolate frogs. In each box was a collectible wizard card – just like you see in the movies. That’s when my collecting started. I still have a chocolate frog fully wrapped and sealed from all those years ago.

When Simon passed away, I’d buy items to remind myself of him. It started with little things like key rings, teddies and accessories. As my son grew up, we’d spend weekends in Toys R Us and I’d buy him a little figurine – but it was really for me!

Over the years my collection grew until it filled a whole room and then my whole house. I had to move three years ago just to make space for it all.

Such a magical day

I was a single mum until I met my second husband, Martin, in 2016. We tied the knot at Discovery Cove in Florida and, of course, it was Harry Potter-themed.

I made my own bouquet of flowers using pages from Harry Potter books. After the ceremony, I put on a Hogwarts robe and Martin and I had a photoshoot at Universal Studios with Diagon Alley and the Hogwarts Express as our backdrop. It was a magical day I’ll never forget.

Martin doesn’t really like Harry Potter – but he’ll do anything for me and knows just how much the franchise means to me. And, amazingly, my collecting has never caused an argument between us.

It’s been 20 years since I first picked up a chocolate frog in Tesco. Now I hold the Guinness World Record for the biggest collection of Harry Potter (and Wizarding World!) memorabilia.

My collection of over 6,000 items takes up five rooms and a hallway when it’s all laid out! I still remember counting it all to get the record. We had to take a photo of every single item and write each one down while being videoed. Two officials counted with us and it took five hours – we were even videoed when we took a break. It’s so strict.

The most Martin’s spent on an item is a few hundred pounds (usually a Christmas present, like the £350 LEGO Hogwarts Castle) but I like my bargains. You’ll often find me trawling the web for the best deals. Still, we save money in other places – we’re past the age of clubbing!

Before we moved house I was collecting about 100 items a year. But I don’t want to move again, so I’ve slowed down. Now I’d guess I’ll buy about 50 things.

We recently went to the premier of Fantastic Beasts: The Secrets Of Dumbledore and got some priceless pieces to add to my collection. Martin and I queued for hours to get a front row view of the red carpet – I got selfies with director David Yates and Eddie Redmayne, who plays Newt Scamander. Jude Law even signed my world record certificate!

While I watched the film with the stars, Martin stayed outside and was given a giant movie poster by a security guard. It might seem mean to leave my husband outside – but he doesn’t share my passion for Harry Potter.

He wanted to join me on my journey to London because he knows I’m really bad with directions. And without him, I wouldn’t have the poster. He’s spent hours queuing with me to see the actors and even walked around London for seven hours with Mad-Eye Moody’s walking stick!

My collection ranges from figures and fan posters to jewellery, vintage bins, calendars, shoes and clothes. I practically live in my Marauder’s Map dress.

My favourite item changes all the time. At the moment it’s my collection of Harry Potter watches. Sadly, they don’t help me time travel like Hermione’s time-turner!

Most items I leave untouched, even if they cost pennies. The collector in me says it could all be worth a fortune one day. Besides, my son won’t take it when I’m gone. He told me, “Mum, don’t you dare leave it to me!”

Brendan is 20 now, but I won’t let him forget how much he used to love Harry Potter. I would read him the books so much that he’d tell people he lived under the stairs.

It was awkward having to tell strangers that no, I don’t keep my child in a small cupboard! By the age of 10, spending the holidays dressed up at Harry Potter World wasn’t cool any more.

Poster of 'Harry Potter and the Goblet of Fire'
(

Nowadays, I have to warn him if I’ll be in the papers. His friends rib him, but they all secretly love it. When Brendan’s female friends came over they’d excitedly ask to see my collection – he would get so embarrassed!

When I’m not collecting Harry Potter items or attending screenings, book launches and premieres in my Professor McGonagall costume, my days are spent looking after our menagerie of animals – a dog, an African pygmy hedgehog and six cats.

The puppy is called Bellatrix and four cats are named after characters, too – Sirius, Luna, Albus and Nymphadora Tonks.

I can’t put my finger on why I keep collecting. Every new item I see I fall in love with. My favourite place to pick up vintage items is eBay. They look so much nicer than the modern things.

I bought an absolutely disgusting squidgy Ron Weasley toy recently. It was on sale so I couldn’t resist. But it really is awful – I’m not besotted with every single item… but I’ll keep them.

I have a whole community of Harry Potter fans who I call friends. And I’ve been lucky enough to meet nearly all of the movie characters, too: Arthur Weasley, Draco and Lucius Malfoy, Luna Lovegood, even Ron Weasley – I gave him a Harry Potter PEZ dispenser and he gave me a big cuddle. I’m usually speechless when I meet the actors, I’m so excited.

I keep saying I’m going to dwindle down my collection… but Martin took me to Warner Bros Studio Tour: The Making Of Harry Potter for my birthday in April and I couldn’t resist buying more!

It’s been 25 years since Harry Potter And The Philosopher’s Stone was released. I feel different to most fans – the magic was what I clung to when Simon died. I needed something to help me deal with the pain of losing my husband, and Harry Potter was there. To me, it’s more than just a collection. It holds my happiest memories.

The 25th anniversary hardback edition of Harry Potter And The Philosopher’s Stone is out on 26 June (Bloomsbury, £16.99)

Previous : Britain’s army must get ready to fight Russians and win World War 3, top general warns
Next : Killer pretended to be his victim in twisted text messages to her own mum