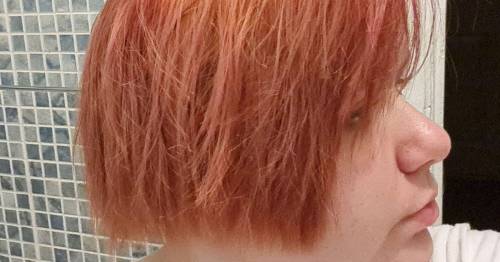 Mum’s fury as daughter, 15, is ‘sent to isolation as punishment for having red hair’

A mum has shared her fury after she claims her 15-year-old daughter was put into isolation for two days "as punishment" for having dyed hair.

Jodi Burrows had dyed her hair purple over the summer holidays but knowing it needed to be a natural colour tried to tone it down before starting the year at at Ecclesfield School, in Sheffield.

YorkshireLive reports her mum Sarah Burrows said the purple colour was a challenge to get out, so they got the hair to a "reddish" tone, which they assumed would be acceptable to the school.

But Sarah now says Jodi is "missing her education through no fault of her own" after the school placed her in isolation because they were unsatisfied with the colour.

Jodi Burrows had dyed her hair purple over the school holidays
(

She says she received a phone call from the school last week to complain about her daughter's hair, in which they described her hair as "bright pink" – something Sarah strongly refutes.

Sarah and Jodi tried again to get the red dye out over the weekend, which they say "isn't easy", and could only get it to an "auburn" tone, rather than her natural brown colour.

Sarah says the school were still unsatisfied with her daughter's hair colour so sent her to isolation.

Sarah said: "I didn't know she was put in isolation until she came home. She had to stay inside all day as a punishment.

"I tried to call the school, but I didn't hear anything back. And she was put in isolation again on Wednesday.

"We do not penalise adults in working jobs for a hair colour change so why should this be affecting our children. We have gradually been returning her hair to the colour brown.

"The school have been wrongly isolating my child for the past few days claiming her hair is not of a satisfactory standard."

Sarah added: "My daughter is missing her education through absolutely no fault of her own other than wanting to express herself, which now she has removed the colour is still proving to be an issue for the school."

Sarah believes putting her daughter in isolation is particularly unfair given the impact the Covid-19 pandemic has had on schooling.

Jodi was put into isolation for two days
(

"As we all know the last two years during the pandemic have been very unpleasant for all schoolchildren, and now more than ever our children’s education must be paramount," she said.

"Fundamentally my daughter has great grades, a positive and focused attitude toward her education however I feel she is now being penalised because of the way she looks."

Sarah said she didn't understand why youngsters were "targeted" for wanting to express themselves.

"I do not agree nor do I understand why schools target our children for simply wanting to express themselves through hair, make-up and ways of dress," Sarah said.

"None of this impacts our children’s learning, it is morally wrong for anyone, let alone children be made conscious of how they want to look."