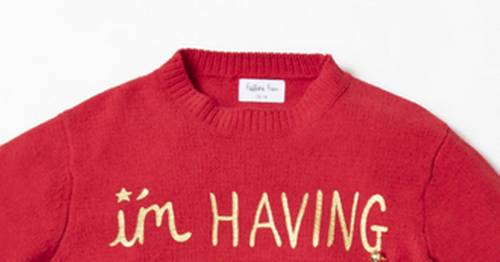 A mum has slammed a Home Bargains for selling an insensitive Christmas jumper in its stores.

The sweater has the phrase 'I'm having a meltdown' emblazoned across it, which one mum said was offensive to people with autism.

Another MumsNet user said the 'awful' garment poked fun at autistic people and was 'very ableist'.

However, other mums argued it was obviously a joke as a snowman can be seen melting on the front of the jumper, EdinburghLive reports.

The mum who first posted about the jumper on MumsNet wrote: "I seen this when I was in store today and it just didn't sit right with me. I do have a neurodiverse DD so that might be colouring my view slightly."

As described by autism.org.uk, 'a meltdown is an intense response to an overwhelming situation. It happens when someone becomes completely overwhelmed by their current situation and temporarily loses control of their behaviour.'

It sparked a debate on MumsNet with some agreeing with the original statement and others claiming it is just a bit of fun.

"I don't see anything wrong with it to be honest, just a bit of humour" One said.

Another added: "Literally anyone and everyone can have a meltdown. Snowmen included. I like it."

The original poster then added: "I associate meltdown with autism but happy to accept that that's just me"

But others backed the mum up, says Edinburgh Live.

A second added: "Not just you op but a lot of people in here are very ableist, perhaps without realising. It's an awful jumper that makes light of being autistic."

The thread then turned into a discussion as to whether the term 'meltdown'' was exclusively related to autistic people.

One asked: "Is the expression "having a meltdown" particularly related to autism? I had no idea. I thought it was a widely used expression."

And someone replied, explaining: "The issue is that the language has been appropriated by the NT community to mean a tantrum, and so now, the neurodiverse community have no language that expresses the biological phenomena that they actually experience during a “meltdown”.

"And worse, when a ND person does experience a “meltdown” it’s conflated with tantrum and the ND person is not only not offered the correct support they are often judged and treated appallingly for “misbehaving”."