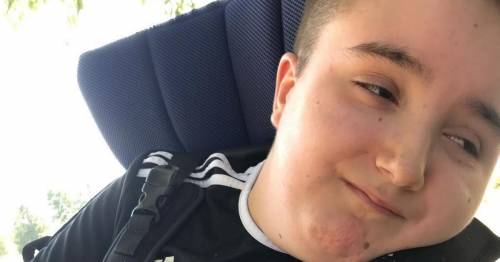 A mum has spoken of her heartbreak after her disabled son said he wanted to go to heaven because it hurts too much to be here.

Spencer Powell, 17, is cared for by his mum Emma Powell after having a fetal stroke when he was in the womb, and being born with a series of complicated disabilities.

Now in so much pain he told his mum of his agony in a heartbreaking moment.

Spencer said: "I want to go to heaven because it hurts too much to be here now."

He lives with his younger brother and mum in Staunton, Hampshire.

Emma, 37, told GloucestershireLive : “Spencer has blind cerebral palsy and life-limiting breathing conditions. He also has hip dysplasia and at the moment he lives with his hip out of his socket.

“In the first trimester of pregnancy he suffered a fetal stroke in my womb. Nothing was detected during the pregnancy.

“I had a text book pregnancy and labour which lasted only one hour and 45 minutes.

“Shortly after he was born they picked up on his vision impairment but not the extent of his disabilities until he was about eight months old.”

She became concerned Spencer was not attempting to sit up or crawl, but was told by professionals that was because he had a vision impairment, he would be less inclined to reach such milestones.

Emma said: “We were referred to Great Ormond Street Hospital and have been back there many times since due to all of his other conditions.”

Spencer’s cerebral palsy affects all four of his limbs.

He also suffers from six conditions which affect his sleep, breathing, growth and brain and others which can cause late development compared to other children of his age.

Despite all of the complications he faces in his daily life, he is described as being ‘bright as a button’ and a very knowledgeable young man.

Emma said: “He is a complex case and when he had his diagnosis, he was only one of 11 in the UK with his conditions.

“He is bright as a button. Even though he is blind in the left eye and can only see three feet away in his right eye, he managed to get the Argos book and remember the items in the book. Then he got me to test his knowledge.

“Spencer wants to be a builder when he grows up and when a man came around to do adaptations to his room, he told them ‘you can’t do that mate as it breaks housing regs’. He is very switched on.”

Because of the pandemic, Emma was terrified Spencer would catch Covid which would affect his already chronic respiratory conditions,.

He has also been unable to access treatments to help him with his muscle restricting conditions.

Emma said: “Due to his respiratory condition he was having free flow oxygen. However last Christmas Eve his oxygen stats were plummeting and I had to call an ambulance and they were able to resuscitate him at home.

"Since then he has had to use a CPAP machine as was stopping breathing 18 times an hour during the night.”

The NHS website explains: "A CPAP machine gently pumps air into a mask you wear over your mouth or nose while you sleep.

"It can help improve your breathing while you sleep by stopping your airways getting too narrow. Improve the quality of your sleep and help you feel less tired reduce the risk of problems linked to sleep apnoea."

But now he needs such a machine, it puts him at a higher risk when needing operations and he will require an intensive care bed when he goes into hospital.

Emma said: “He has been in so much pain. His hip has come out of his joint and worn away.

“He has not been able to have the Botox injections to relax his muscles or his operation to cut his hamstrings to ease the pain in his legs.

“We had a hot tub for him which really helped him. I was able to go in that with him so it would relax him and for half an hour I had a window where I could perform physio on him with nice warmed and relaxed muscles.

"He describes being in it like being a marshmallow melting in hot chocolate, love him.

"It also helps him sleep. I remember asking him when he dreams if he walks or uses his wheelchair. Spencer replied saying 'Do not be so silly mum, I fly', and that made me smile.

“On top of everything else he needs to have a knee cap removed to help his muscles. When we go out he describes it as having a toothache in his knee.

“He screams in pain when I have to put him in his wheelchair but we have to go out and do normal things teenage lads need to do like get a hair cut or go out and get a treat like a doughnut.”

One emotional day Spencer said one of the most heartbreaking things a parent could hear from their child.

Emma said: “His puppy is up there having crossed the rainbow bridge.

“He told me ‘I want to go to heaven. It is too painful to stay here’ and he closed his eyes. That broke my heart. I do not want him to go.

“Those with his condition are only expected to live until they are around 30-years-old but when it is time to go I know he will be free.”

When Spencer has been under anesthetic over the years, Emma has been rushed to just outside the operating theatre as there have been complications with his breathing problems.

She said: “The last time this happened I rushed up to him and then was at that point stable.

Get the information that matters

With so much changing so quickly, keep on top of what is happening with the Mirror's news updates by email.

Delivered straight to your inbox, our daily coronavirus briefing will keep you informed of what is happening with Covid, lockdown, the vaccination rollout and the impact on how we live. Sign up here.

“He replied to me saying, ‘I was up in the rainbow. I was playing with my puppy and I did not want to come back down. Mum it is beautiful.’

“So when he does go it will be beautiful."

Emma is doing her best for her son to make him as comfortable as possible.

She said: “When the hot tub had broken so did my heart. I want to be able to buy him one to be permanently installed in the garden.

“It is going to cost me £10,000 to get it all done. I have done this on my own with Spencer all of his life. It is really hard for me to ask for help.

Emma said: “Children with this condition rarely make it the third decade of their lives.

“The oxygen they give them keeps them alive but it also disintegrates their lungs.

“I am trying my best for him and want him to have all I can give him now while he is here.”