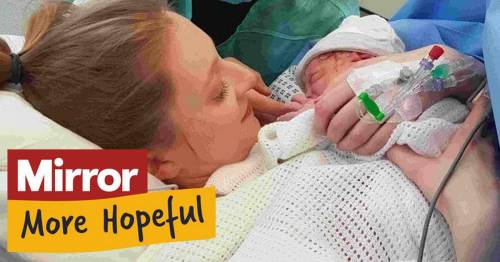 A mum who feared her eating disorder would prevent her from ever having children has finally given birth to a baby boy.

Sally Cox was so desperate for a baby she used to pretend that dolls she'd bought were real children.

But now the 26-year-old and her partner Ryan, 23, have welcomed a little boy Carter.

She said: “Ever since I was little, I have wanted to be a mummy so the years when I thought I could never have a baby were very hard.

“Every photo of me as a child is of me playing with a doll or pushing a doll’s pram.

“And even as an adult I used to pretend that my reborn doll was a baby, and I took him out for walks and let strangers talk about him like he was real.

Sally Cox, 26, took photos to highlight the issue of anorexia
(

Sally and Ryan celebrating her pregnancy
(

“I realised I had to start eating more if I wanted to be a mum and that was the turning point for me. And now that I have Carter I have the best reason in the world to stay healthy and strong.

"He has totally turned my life around.”

Sally has done photoshoots to raise awareness around anorexia and said it was Carter that helped her finally turn the corner on the illness.

Sally,from Blackpool, said she struggled with food from a young age and because of that stuck to a bland diet and did not eat much.

People would often comment on how skinny she was and, as a child, she thought that was a good thing and wanted to shrink further still.

When she was a teenager she was referred to mental health support and not allowed to do PE because she was too weak.

She would often go all day without food at school, then work in a supermarket.

She said: “I had a phobia of eating in front of people so I would just maybe have a KitKat in the staff toilets and that would be that for the entire day.”

Sally’s weight dropped to six and a half stone and when she began trying for a baby, and doctors warned her she was too thin to conceive.

Sally Cox tried for three years to have a baby
(

Sally Cox in hospital with her baby Carter
(

She said: “We tried for three years for a baby, and it didn’t happen. I had never had regular periods because of my eating disorder. I was told there were hormones which would help but my BMI was too low.

“I got dolls to help with my longing; I had 28 in all and a reborn doll who I took out in a pram and he looked so realistic.

"When strangers stopped to admire him, I played along and pretended he was real.

“It was lovely being a mum just for a few seconds and it made me want the real thing even more.

“Ever since I was little, I’d had dolls and I had chosen the names for my future babies. I was all about being a mum.

“I realised that if I was going to realise my dream, I had to start eating. I addressed my fear of eating in public and slowly I started to get better. I put weight on but only a couple of pounds.”

Sally in hospital with Carter
(

After five years of trying, Sally fell pregnant in December last year and throughout the pregnancy worried whether her body could bring the baby to full-term.

She said she felt guilty because of how small her baby was and thought she was “letting him down”.

Carter was born in August weighing a healthy 6lbs 6ozs.

Sally said: “I fell in love with him. I had wanted a baby for so long. I couldn’t believe he was actually real.”

She is now enjoying motherhood and the responsibilities have even helped her gain weight.

She said: “Mentally, I am so much stronger. My mindset is so much better and healthier and it’s all thanks to Carter.

"Anorexia is a journey but I know I am not facing it alone.”