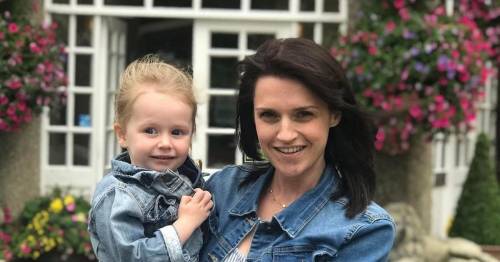 A mum with a young daughter has opened up about living in constant anxiety with her multiple sclerosis (MS) as she aims to raise £45,000 to go towards her treatment.

Mum-of-one Tracey Harland from Houghton-le-Spring, near Sunderland, was diagnosed with MS in January 2019 after living with strange symptoms like pins and needles in her hands for years.

The 36-year-old would also often suffer from "brain fog" forgetting the names of objects and getting confused during conversations along with several physical symptoms, reports Chronicle Live.

Tracey, who described her MS as a "ticking time bomb", has since opened up on living with the fear one day she will wake up and not be able to walk.

The mum wants to be able to treat her MS to secure a better future for herself, partner Reece, 43, and four-year-old daughter Esme.

She explained: "I could start to lose the function of my hands, lose my sight, end up in a wheelchair.

"When you have MS, you're constantly thinking about waking up and wondering if you'll be able to walk that day.

"There is no warning sign, you can't prepare for it. One day I will just be walking and my vision will go a bit wobbly, it's really scary.

"I have symptoms I deal with on a daily basis but I have this constant anxiety.

"I don't want to be a burden to my daughter."

Tracey lived with her symptoms for so long she believed "everyone suffered from them" and believed they were down to a problem with her back.

But as her symptoms got more worrying, Tracey believed she had MS and this was confirmed in January 2019 when she got an MRI scan.

The mum explained: "I used to get a stabbing pain in my foot and pins and needles in my hands and arms. I have got cognitive issues and I used to get tingling down my spine.

"I would get brain fog so I'd forget the names of things and if we were talking I'd forget what you said at the beginning and get confused about where the conversation was going.

"When my daughter was born, about nine months later I got numbness on the right side of my face and it went down my neck and down my arm.

"I would go to my osteopath and in a couple of weeks, it would go away. I thought it was all down to issues with my back.

"I went to my GP who said: 'I think this is stress, you've just had a baby, you've returned to work' and they were really pushing anti-depressants.

"I said it doesn't feel quite right, I don't feel like this is what you think it is."

After her diagnosis, Tracey realised her symptoms made sense adding: "That's when I realised a lot of my symptoms I had been dealing with all these years, that I thought were normal were down to my MS.

"When my symptoms flared up I thought I overdid it with my back. All these years, I thought it was normal and everybody had these."

Tracey said MS is a progressive, silent disease that is still progressing in the background.

It is likely she will progress to secondary progressive MS which is when the bigger issues begin like losing speech and mobility.

Tracey is now hoping to raise enough money to get stem cell treatment (HSCT) at a clinic in Clinica Ruiz in Mexico, Monterrey which is 85% effective at halting the disease and could possibly reverse previous damage.

The HSCT treatment is available in the UK but Tracey said the NHS criteria is extremely strict and she is not eligible for it currently.

The mum will stay at the clinic for 28 days where she will receive chemotherapy to kill her rouge immune system.

Although MS medication to slow down the progress is available on the NHS, Tracey believes the HSCT treatment is the best option.

She said: "I'm 36-year-old I have a four-year-old daughter I don't want to be slowing down the progression I want it to go away.

"This should be the first line of treatment, why take all these drugs to slow down the progression and wait to see how much worse it gets when you can potentially stop it."

Tracey's best friend Kirsty Spence set up a Go Fund Me page in a bid to raise the £45,000 needed.

She said: "The thought of not being able to push her child on a swing, chase her around the garden or just do a simple thing or go for a walk with her daughter and soon-to-be husband is a constant worry for Tracey.

"As MS is just a ticking time bomb with no cure, she has described it as living with a shadow over her life, constantly living with the fear that one relapse could change her whole world forever.

"Tracey is a beautiful soul, who never asks for anything from anyone. She is selfless, loving, and the strongest woman I know.

"She is a wonderful partner, daughter, sister, granddaughter, niece, and friend and a truly amazing mother to her daughter.

"To give her this chance of a healthy life would be the greatest gift anyone could offer."

If you would like to donate, you can do so here.