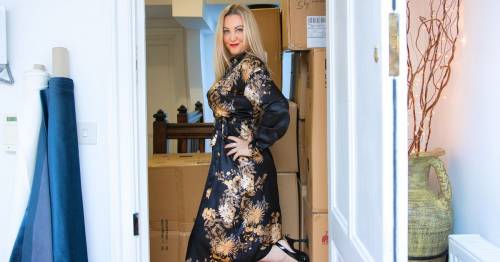 A mum-of-two left with less than £1 in her bank account after her marriage collapsed is now a successful businesswoman.

Nicky Bright, 51, from Cardiff, remembers being totally immersed in her work as a store manager when her children, aged 16 and 21 at the time, called with the news that would change her life forever, Wales Online reports.

Nicky said: "So I take the call and, it happened really quickly, my son said: 'Mum, Dad's having an affair'.

"Both my children found out before me and I was just: 'Wow, wow, it can't be right'. I even thought my kids were wrong – how could they know he was having an affair?

"It took me about five minutes to get home and the whole time I was driving back I was just constantly thinking I just wanted to find out if this was true."

At home Nicky confronted her husband who confirmed it was true and he wanted to leave.

Nicky said: "The complete shock of thinking: 'Why wasn't I aware of it? What happens next?' This was the only life I've ever known. How would things change now?

"How could I afford to live on my own with the children and mortgage? It was going to be impossible.

"I cried morning, noon and night for the first eight weeks. I couldn't stop – the feelings I was feeling were so overwhelming.

Logan and Laker Smith hanging out in the floating kids' den
(

"You feel as if you've lost somebody, like they've died, but you also lose yourself too and everything else that goes with that – it was horrific.

"I was knocked off my feet completely for a year – upside-down, on the floor – struggling to keep on top of the bills.

"Financially I was cashing in all my savings but I just couldn't keep my head above water – the mortgage was big, gas and electricity was massive, I was falling behind with everything."

Over the months Nicky struggled with the stress of the situation – she lost weight, her hair started falling out, and within a year she had to leave work.

"She said: "I felt like my old life had completely gone and I struggled so much I couldn't concentrate on work, I couldn't do the job anymore. I was going backwards and it was absolutely terrifying.

"I started selling things to try and keep paying the mortgage because I knew I didn't want the house to be repossessed.

"I remember going into my bank account and there was 99p in there so I couldn't even buy food for the kids.

A renovated bedroom in one of her holiday lets
(

"I am so lucky my parents could come up and buy food. It is the most horrific feeling in the world. I wanted to drown my sorrows and I was going into a very bad place.

"I knew I was going down and I almost felt like I was being dragged into the darkness somewhere that was so horrible. It was just very, very scary."

Then one evening when Nicky was at total rock bottom, as she lay in darkness knowing she was about to lose the house and had no fight left, she heard her children whispering in the hall.

Her daughter said she was too afraid to open the door and go into the dark room because she thought her mum might have taken her own life.

Remembering that moment makes Nicky emotional as she recalls hearing the fear in her daughter's voice.

It was the shock that she needed to try to drag herself back up.

Nicky said: "So from there I just decided: 'Okay, you've been a boss, you know how to make money, you've turned things around in the store – now come up with a solution."

Nicky had hosted foreign students studying in Wales at her home in the past so it gave her the idea to rent out the house to get some income as she worked out a plan.

She moved out with only a suitcase of clothes and belongings left, stayed with her parents, and took time to look at her strengths.

She had worked as an estate agent and she had run her own furniture upcycling cottage business when the children were small before she went into retail.

Previous : Woman who had period every 10 days ‘forced’ to choose between baby and buying home
Next : End of pandemic restrictions causing ‘great deal of fear’ for some N.S. seniors