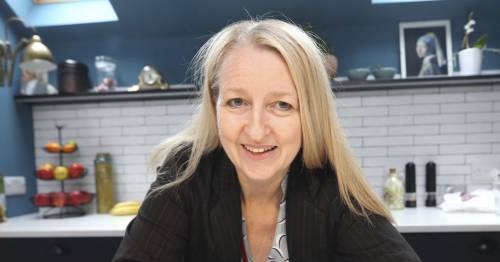 A teacher who feared she had dementia has told how she was diagnosed with Lyme disease after nearly 30 years.

Mum-of-three Pauline Bowie, 54, thought she must have dementia – after enduring brain fog, headaches, muscle pain, carpal tunnel, and even wetting herself.

She begged NHS doctors to take her symptoms seriously but they were repeatedly stumped for answers until she took matters into her own hands.

It wasn’t until Pauline sent blood samples to Armin labs in Germany in 2018 that she was finally given the diagnosis of Lyme disease, after being bitten by a tick in America in 1989.

The condition, a bacterial infection transmitted through ticks, can cause serious problems and attack the nervous system if left untreated.

Pauline was diagnosed with Lyme disease – after suffering for 29 years
(

The mum feared she had dementia
(

Pauline had battled her illness for almost 30 years before getting antibiotics which cured all her agonising symptoms away in just four weeks.

Pauline, from Clydebank, West Dunbartonshire, said: “I was really struggling with my health for years. I was in agony every day, I just didn’t know why.

"It was so painful, but the really scary thing for me was the brain fog. I was worried I had early-onset dementia. I would forget things and found it hard to think sometimes.

“It was horrible. I thought I was losing my mind. When the diagnosis came through, the penny dropped so quickly as soon everyone could see the huge improvement and change in me.

“Symptoms I had for 29 years started to suddenly disappear. My carpal tunnel was gone, I stopped wetting myself, the joint pain started to clear, headaches from hell left and the brain fog went away.

“I couldn’t believe it.”

Pauline had been working for Camp America in Michigan in August 1989, aged just 21, when she was bitten by a tick.

Soon after she suffered from the flu before developing a bullseye rash which grew to the size of a ‘dinner plate’.

It was misdiagnosed as ringworm on her return to Scotland and over the next six months her health continued to deteriorate.

Pauline attended gastric specialists, urologists, cardiologists, gynaecological specialists, rheumatology, neurology and latterly infectious diseases – but could not find answers as to why she was so ill.

It wasn’t until she heard of Lyme disease in April 2018 that she sent her blood to Germany, which returned positive for the condition.

She was prescribed 28 days of doxycycline which cleared her symptoms, but after treatment stopped they returned.

Pauline was then treated by a doctor for two years with a combination of metronidazole and rife, which targets the disease with low electromagnetic energy waves.

She now self-treats herself with her own rife machine and also maintains a healthy diet to keep symptoms at bay.

If she suffers a severe flare up, her GP can prescribe her a boost of antibiotics but she now spends most days pain-free and is enjoying remission.

She added: “In Scotland we are now fighting for better testing and treatment of patients with Lyme and other tick-borne illnesses.

“I always tell people to keep the tick that has bitten them and send it away to be tested just to be safe.

“The thing is they are so small you won’t feel a thing if you are bitten, so you need to check for them if you have been outside all day.

“It might be so small you mistake it for a blackhead, but it is important you remove it properly as soon as possible.

“I keep a tick remover with me everywhere I go now and my whole family does the same now.”

Pauline is determined to spread awareness so others can get help as she is in remission from the disease.

She has volunteered with the Lyme Resource Centre for three years.

Trustee Dr Jack Lambert said: "Lyme disease is now considered the 'great imitator' as it mimics many other conditions and may be missed.

"Most people don't remember a tick bite, less than half remember the classic rash you get and the antibody test is not that accurate, with studies showing it goes positive in 30 to 70 percent of cases.

"There are likely much more patients in Scotland with Lyme disease than reported.

"The consequences of a missed diagnosis are devastating.

"However, sadly, training for doctors, pharmacists, and other health care professionals is minimal.

"We need strong campaigns in Scotland for prevention, signage and warnings to those going out into the great outdoors to make them tick aware, and to train both patients and health care workers to recognise early signs of Lyme disease."

Previous : Younger than 35 and have a family? N.B. town may have land to sell you
Next : ‘Mile-long’ queues return at Birmingham Airport as passengers dub it a disgrace