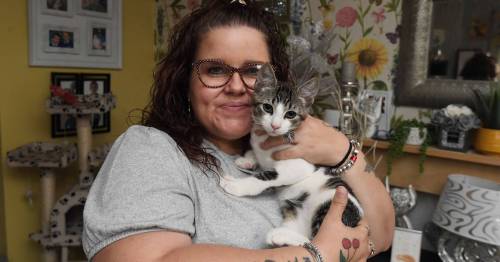 A mum claims she's been threatened with a £1,500 fine by her housing provider for having too many cats.

Lindsay Simcox says her autistic children believe the pets are their best friends and provide companionship as they 'don't have real friends'.

But the mother-of-four says Midland Heart, which owns her family's West Bromwich home, has ordered her to get rid of them – or face being taken to court.

Mrs Simcox, who has lived in her home for seven years, claims she was busted for having 11 cats after a fallout with a friend.

The 43-year-old accepts breaching a tenancy agreement – capping the number of animals a household can have – but she has called on Midlands Heart to see the bigger picture, describing the situation as "heartbreaking".

A letter from Midland Heart, seen by Black Country Live, warned Mrs Simcox could be hit with a for £1,500 bill should legal action be action against her.

She says her children need the cats
(

She claims a representative of Midland Heart recently visited her home threatening to get a "court order".

Mrs Simcox, who also owns four dogs, said: "She (the representative) said 'we could get a court order to get all of your animals taken off you'.

"My autistic son, who was waiting to go to college, had to get up and walk out because he couldn't cope.

"She (the representative) has got to get rid of all the cats, she said can't keep any of them, there is no room for negotiation.

"I said you have been to my house and you can see my kids really love them.

She fears a huge fine
(

"They haven't got any friends who they can hang out with. They really have got friendship and love with the cats.

"All through lockdown, these cats have kept my kids sane.

"She said 'there is no room for budging on this, I am coming out in 28 days. She said 'we do go into court quite quickly, so it will be a quick process'.

"She said 'you could end up even living in a hostel, or temporary accommodation, because I can't see anyone willing to take you on with all these animals'."

Mrs Simcox said the representative recognised her house was "clean", meaning cleanliness was not an issue with regards to owning lots of animals.

"It has been done by an ex-friend to be spiteful," she said.

She was given permission for six pets
(

"It hasn't been done because I'm dirty or the cats are dirty or being a menace.

"It is because someone has decided to be spiteful. I do apologise for not telling them. Some of them (the cats) have been here for years."

Mrs Simcox says she receives £67-per-week on carer's allowance, thus she cannot afford a solicitor to defend herself legally.

She also says she cannot afford to move house again but added that rehoming the cats is "not an option because the kids love them".

"It would break their hearts to get rid of them," she said. "I don't know what to do."

A letter sent from Midland Heart, seen by Black Country Live, warned legal action may be taken against Mrs Simcox if she does not get rid of her cats.

Lindsay say her children don't have any other friends
(

But the organisation told BlackCountryLive the family was not at risk of being evicted.

The letter said: "Should you continue to breach the terms of your tenancy agreement by allowing pets to be kept on your premises without our permission, I will have no choice but to refer this matter for legal action.

"A referral for legal action may result in Midland Heart applying for an injunction order against you to prevent you from continuing to breach the terms of your tenancy agreement.

"Such an application will be accompanied by a claim for costs against you; this is likely to be in the region of between £750 and £1,500."

Midland Heart is a housing provider that aims to provide affordable homes in the most challenging areas of the Midlands, its website says.

Can you spot the cat?

Vicki Brownhill, head of housing management at Midland Heart, said: "Mr and Mrs Simcox are long-term tenants and are not at risk of eviction.

"They received permission to have six pets in 2014.

"When we received complaints from other customers recently regarding the couples’ pets we investigated and found that the number of pets in the property exceeded 15.

“We met with Mr and Mrs Simcox earlier this month to work on an action plan which includes looking into rehousing some of their eleven cats.

"No mention of eviction was made and we’re working closely with the family to reach the best outcome for all involved.”