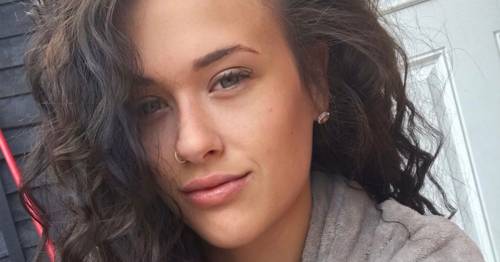 A young mum who lost all her hair to alopecia in the space of a few months has called for more face to face doctor appointments as she seeks answers for why she is losing her hair.

Charlotte Collins, 27, was shocked to discover a bald patch the size of a 50 pence on top of her head in June 2020 after her boyfriend Theo White, 26, spotted it while outside.

The mum-of-one was devastated after being diagnosed with alopecia just weeks later and was told the cause was delayed stress.

But since her diagnosis, Charlotte has claimed to be unable to get a face to face appointment with a doctor, leaving her worried the alopecia may be caused by something more serious.

Charlotte, from Leicester, made the decision to shave her head last September and has since been fighting to get seen in person by a doctor.

She chose to wear wigs
(

Charlotte, who runs a removals company, said: "I was in the garden with my boyfriend and the wind blew and he told me I had a bald patch on top of my head.

"I rang the doctor and told them and they got me in straight away the next day for blood tests but after they came back all clear, I was diagnosed with alopecia.

"My hair was falling out in handfuls – I've always had thick, luscious brown hair so this was devastating to me.

"I couldn't wash or brush it because it would just fall out in clumps.

"Next I started losing my eyebrows, eyelashes and I just wanted an answer as to why this was happening to me.

"The doctors told me it was delayed stress but I was at the happiest I had ever been and I can't help but wonder if it's something more serious that's causing this.

"Since that first appointment, I haven't been able to see a doctor and my appointments kept getting cancelled.

"I was left with this devastating information and absolutely no help and had to save up hundreds to buy myself wigs and hats to cover it up".

Charlotte had long, thick, brunette hair before her diagnosis and was left feeling depressed following her diagnosis.

By September 2020, Charlotte had lost 80 per cent of her hair and had a few remaining strands on the top and bottom, leaving her with no choice but to shave.

Charlotte explained: "I've always been known for having the thickest, longest hair so it was a shock for me to lose it all so quickly.

"When I first started losing my hair, I started wearing hats all the time.

She is now calling on more face-to-face appointments
(

"I had never bought a wig in my life so it was daunting.

"The prices of wigs are extreme and it's upsetting for someone who doesn't have a massive income.

"I was more stressed after my diagnosis which meant my hair just kept on falling out and I wasn't referred to a therapist or counsellor.

"I went into hiding for a year."

Charlotte was left frustrated after claiming to have hospital appointments cancelled.

She added: "I have a daughter and the thought of her losing her blonde curls would destroy me.

"There's no support for people with alopecia."

She added: "I made the decision to shave my head after waiting for a dermatologist to call and never hearing from them.

"I was frustrated but it was the best decision I could have made at the time – it was a weight lifted off me.

"Before my boyfriend shaved it, I cut two little plaits to keep as a keepsake and I still have them in a box.

"It was emotional and sentimental and I was in shock for quite a while after doing it.

"GPs need to start seeing people face to face again – it's frustrating for me to be left alone to deal with this."