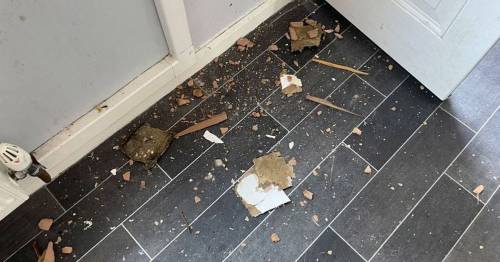 A young mum said her "uninhabitable" home has been forced to fill up her garden paddling pool with bubbles and wash her son there.

Robyn Campion, 23, said now the weather is warmer she has taken to wash her son in the garden as the bathroom is so damaged she claims it is too dangerous for her child.

When it was still too cold to bathe her son outside, the mum, who lives in a council-leased property, claimed she would resort to asking a family member nearby to let her use their shower.

Ms Campion said the house in Goole has suffered a long-term leak in the bathroom which has left it with holes and exposed pipes.

It has also caused the partial collapse of the kitchen ceiling below which in turn is exposed and causing the house to be cold and draughty.

Are you living in a situation of the sort? Let us know at webnews@mirror.co.uk 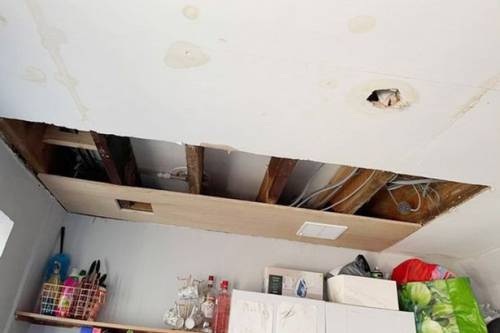 The long-term leak in the bathroom has caused a partial collapse of the kitchen ceiling, the mum claims
(Image: Hull Daily Mail / MEN Media)

She claims she has approached East Riding Council a staggering 13 times over the state of the house, which has reportedly had issues ever since she moved in.

"My wet room started leaking really badly in April and went all over the kitchen ceiling below," she said.

"Someone came out but then I didn't hear anything back and it's just gradually got worse and worse. I've kept ringing and I am getting nowhere.

"Someone came out and looked at it and said he didn't know what to do, and he said he'd file a report and they never got back to me.

"I have now been told I will be measured for a bath but the kitchen ceiling is falling in. A piece of it even hit me on the head."

She said her son is "basically confined" to the lounge as if he is in his bedroom there is a risk he will go to the bathroom on his own.

"A member of staff from the council told me it was best to keep him out of his bedroom for his safety, and when I called social services about it, because of my son, I was told to 'make a game of it and camp out in a tent' with him in the lounge," Ms Campion said.

"I don't want a different house as I am near my family here, but I just want a house that is safe and habitable."

She added: "When I moved in I had no boiler, there were fleas in the carpet, it was disgusting." 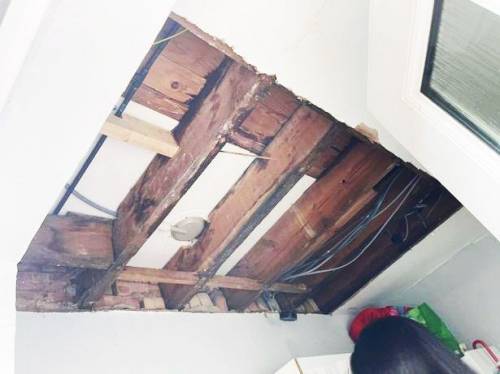 Her son was a newborn at the time and she said in the first month of his life they slept on the sofa at her mum's house while friends and family stripped the house and made it habitable for them both.

She said the lack of a kitchen ceiling has also made her house "freezing and draughty" resulting in her little boy having a severe cough and cold.

A spokesperson for East Riding of Yorkshire Council said: "The council has been in frequent communication with the tenant regarding the issues raised and the housing maintenance team visited the property last week to further assess the situation.

"This led to further remedial works last week and a plumber was also called out for repair work to the shower.

"The ceiling is currently being left to dry out and the whole ceiling will be replaced next week.

"The wellbeing and safety of all our tenants will always remain our priority and we will continue conversations privately with the tenant to address any further concerns following the upcoming repair work."

Previous : Alabama officials offer $125,000 in rewards for tips in shootings of 5 children
Next : Girl 2, fights for life after being hit by moped while crossing road with family