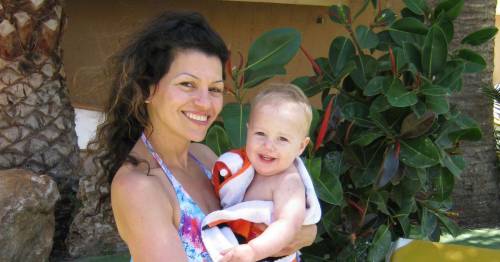 A woman told she was too overweight to have children shred seven stone to have four healthy babies – and she claims it’s all down to a homemade weight loss spell.

Inbaal Honigman, who claims to be a psychic, has been plus-sized ever since moving out of the family home at 18 and beginning to party frequently and snack on junk food.

She steadily gained weight and by the age of 35 was at her heaviest, weighing 17st 10lbs.

The Holmfirth, West Yorkshire woman has been a practising “witch” after having a tarot card reading at the age of 20 when living in Greece for a summer and beginning to believe there was more at play in the universe than she had grown up believing.

She started studying how to read cards and practising witchcraft and by 25 she had embarked upon a career in witchcraft.

While Inbaal was happily married to husband Sean, 46 – who she says loved her “at any weight” – she struggled to conceive due to being overweight.

Desperate to start a family, she turned to her belief system for support – and decided to concoct a spell on Halloween 2008, that would aid in her weight loss journey.

"I’ve used magic for everything I have in life – to find jobs, meet my husband, sell my flat – so I was leaving nothing to chance this time either,” she said.

“I made a decision to lose the 10% of weight that the fertility clinic required before they began investigations.”

Inbaal has been overweight since she was a teenager
(

Inbaal used to party and snack on cakes, biscuits, family-sized bags of crisps, pints of ice cream and chocolate bars
(

When “crafting” a “spell”, Inbaal said she didn’t wish for weight loss specifically as she believed such a wish could make her ill.

Instead, she put together a “health and wellness spell”, combining charms for good sleep, self-confidence, healthy eating and exercising.

Incredibly, Inbaal found that the spell worked and she quickly lost the desired 10% of her body weight, as recommended by the specialist.

While her meals themselves have been the same – porridge for breakfast, sandwich and salad for lunch, and a large vegetarian cooked dinner – she has made healthier choices with her snacks. Instead of picking through a mountain of sweet and savoury snack all day, she selected just one special treat daily so as not to deprive herself.

She was thrilled when conceived naturally eight months later and fell pregnant with her first child, giving birth to Tove, now 11.

Inbaal wanted to be "well, fit and healthy" so that she could become a mum
(

She went on to have a further three healthy pregnancies, giving birth to Vigo, now nine, Zevi, now six, and four-year-old Ludo. She delivered each child via emergency C-section and, once she had recovered, steadily shed eight stone over eight years.

Inbaal also took up running, starting by jogging once a week for half an hour, and building up to her current routine of six workouts a week – including a two-hour run and 45-minute kettlebell set.

At 47, she said she is now fit enough to play with her kids and “give them a run for their money”.

She has now been between a comfortable 9-10st for the past three years and feels fitter and healthier than she had at 30.

And Inbaal isn’t just helping herself with her witchy powers – she has also cultivated a business out of helping other people.

The psychic has been able to guide people towards weight loss by surmising what method would suit them best – from intermittent fasting, to weight lifting and calorie counting.

She said: “There are clients who need magic, and then there are those who need me to message them every day. I love helping people find their healthier self within.

“I believe that spells work on two level – the psychological and the spiritual.

“When you visualise yourself slimmer, you're literally seeing your end goal.”

On a more spiritual level, she said believing that putting those little bits and pieces together sends a message to the universe – which could make “well-articulated wishes come true”.

“Naturally, magic works alongside nature, not against it,” she explained. “Creating a spell and expecting it to do all the heavy lifting for you, simply won't work.

“If you're going to use magic, you've got to put the hard work in.

"I believe that witchcraft gave me the push I needed – my resolve, focus and resilience was stronger – and I found the hard work to be quite easy.”