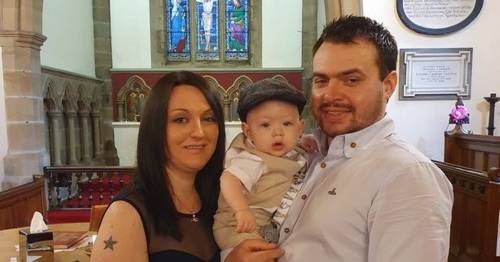 A mum has thanked medical staff who helped her "Christmas miracle" baby who was diagnosed with a devastating health condition.

Preston Mark Middleton was diagnosed with Spina Bifida, which happens when a baby's spine and spinal cord does not develop properly in the womb, causing a gap in the spine.

Doctors also found the little boy had Hydrocephalus, a build-up of fluid in the brain.

The excess fluid puts pressure on the brain, which can damage it, the NHS explains.

Mum Deborah, 37, underwent fetal surgery in Belgium when she was 25 weeks pregnant in a bid to repair her son's spine, Chronicle Live reports.

Now, the woman and the boy's dad David, 33, have thanked hospital staff as the family prepares to celebrate their first Christmas together, with Preston approaching his first birthday.

Deborah said: "Me and David are so incredibly grateful for all the staff that helped us. We didn't know what the surgery would be like, we didn't know how Preston would be now.

"We do know it's helped him a great deal, he's meeting all his milestones and doing everything a typical child does.

"We're incredibly grateful to the NHS who talked us through the surgery and gave it as an option.

"We're just so blessed we were actually able to get the surgery as there is a lot of criteria to meet and some families aren't as lucky as us."

Deborah said she was told during her 16-week pregnancy scan that "something was not quite right" and that there was an abnormality in Preston's brain.

The family is preparing to celebrate Christmas
(

The following week, the mum had an appointment at Newcastle's Royal Victoria Infirmary where doctors confirmed that Preston had the birth defect which can cause weakness or total paralysis of the legs.

The condition also caused a Chiari II malformation, a condition of the cerebellum that can put pressure on parts of the brain and spinal cord.

Following the fetal surgery, Preston was born via a C-section on December 14, 2020, but remained in intensive care while doctors monitored his progress before returning home on December 23.

Due to hospital appointments and lockdowns, last year the family could not celebrate Christmas, but they are now looking forward to the festive period.

Preston Middleton was diagnosed with Spina Bifida and hydrocephalus
(

Deborah said: "Preston was born on December 14 and we weren't sure if we would be able to leave the hospital for Christmas Day but we came home the day before Christmas Eve which was just amazing.

"We got to spend Christmas together as a family with our parents and it was lovely but I feel like this Christmas is our first proper one.

"Last year we had just got out of the hospital and we were in lockdown and now Preston is a bit older he's starting to take notice of everything.

"Just to be able to do all the festive activities with him and live a relatively typical life is just amazing.

"We have been to see Santa and we've planned Preston's first birthday party.

Preston's parents have thanked medical staff who helped him
(

Deborah has thanked her loved ones for all their support, adding: "David has been amazing with how strong he has been and how well he has coped with everything. I couldn't wish for a better husband and a better father for Preston.

"I don't know where I'd be without my mam too, we're really close."

Deborah and David have since thanked all the NHS staff at the RVI Newcastle and neonatal intensive care as well as the team in Belgium for carrying out the fetal surgery.

After initially being given a "bleak" outlook, Deborah said Preston has come on leaps and bounds and is meeting all his key milestones one year on calling him their "Christmas miracle".

She said: "We didn't know what to think when we got the diagnosis, I probably didn't think Preston would ever do the things he's doing now.

"They didn't think Preston would be able to sit unaided so to see him doing all these things is incredible.

"I think you take for granted all these little milestones but for Preston, it's a huge accomplishment. He's amazed medical staff.

"He really is a Christmas miracle and he makes us proud every day."

Previous : Universal Credit payments to rise from today for millions – check if yours is going up
Next : Brave woman shares final request with family before losing battle with cystic fibrosis