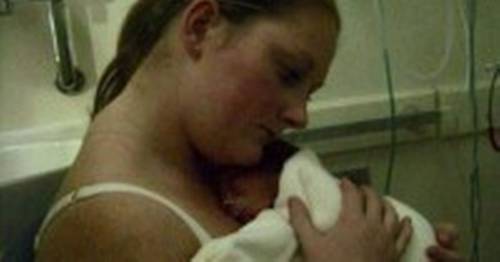 A mum being treated for kidney stones gave birth to a premature baby boy hours later.

Terri Quigley's birthing experience was a frightening rollercoaster which she hopes others will not have to suffer.

She went into an unexpected labour at 26-weeks pregnant in August of 2009 when she was admitted to hospital with stomach pains.

Terri told the LiverpoolEcho: "They thought it was sickness, to do with my pelvis because I wasn't having any contractions but I had that for four days before I went to A&E at the Liverpool Women's Hospital.

"They scanned me and everything was fine with the baby so they put me on a ward and treated me for kidney stones but five hours later the pain was getting worse.

"They then realised I was 10cm dilated with no warning, and the staff just sprang into action. It was like something from Casualty.

Ethan was premature after a 'silent' birth

"I had to have an injection to help the baby's lungs and was supposed to have another within 12-hours, but six hours later he came, still underdeveloped.

"He weight just two pounds 10oz and was born in his sac, like a veil. It was called a silent birth because the baby is too small they can't cry, they haven't got the capacity to cry.

"He was wrapped up and sent straight to the intensive care unit and I couldn't see him until he was eight hours old, it was all so overwhelming seeing a baby that small in a huge incubator, connected to a lot of wires."

Terri's new-born baby boy, Ethan Chadwick-Quigley, weighed two pounds and two ounces and had to be given milk every two hours before having surgery at Alder Hey Children's Hospital at one day old.

She added: "The staff told me they had never worked on a baby that small, it was so scary. The surgery was successful and then he went back to the Women's but from there it was a journey.

"He had bleeds on the brain, his heart hadn't closed properly, he needed two blood transfusions and was often sent from neonatal unit to high dependency to intensive care.

"It was a rollercoaster we were on. I got my first cuddle at two weeks old but only for ten minutes because his temperature had dropped. Eventually he was discharged at nine-weeks old."

Ethan, who is now 12 years old, is a healthy young boy who is aiming to achieve his black belt in martial arts.

Terri and her now grown up son Ethan
(

Terri said: "He was quite poorly for a while, he had chronic lung disease and one time he turned blue and was rushed to hospital. A nurse saved his life that day and I will forever be grateful for her recognising how poorly he was.

"There's loads that you get used to, it just becomes second nature, things you don't ever think of when you get pregnant, like monitoring oxygen levels.

"I remember finding my pregnancy journey book and I only filled until 26-weeks and there's just so much I missed out on."

Terri said every year she uses prematurity awareness month to share her story, in the hopes of providing comfort to others and to thank staff for saving her son.

The engagement coordinator for Specialist Perinatal Services said: "Without the Liverpool Women's and Alder Hey, I wouldn't have my baby so it's a time to say thank you to them.

"It's also to say thank you to the other neonatal mums for their support who had been their before me. I want to share my story to offer light to those going through it now, to give that reassurance.

Terri with husband Alan and children Michael, Courteney and Ethan

"I can't describe how emotionally draining it is but there is light at the end of the tunnel and you can go on to have an awesome 12-year-old who is testing for his black belt in martial arts.

"At the time you are going through hell. At the time, having a premature baby doesn't enter your head. I didn't think it would happen to me.

"Thankfully there is more awareness now but more does need to be done. When you're in the neonatal unit you don't want to leave your baby to go for check ups or get that mental health support.

"It's also recognising that premature babies are different. Ethan couldn't read until he was around nine and he never met any milestones.

"He was always behind and then you get that mum guilt and compare to other people. Your child can be behind, but they will catch up.

"Ethan is 12 now and you couldn't tell he was born prematurely but in the early years he had to do reception twice because he didn't have the development."

Terri added: "One of the biggest things for me is sharing your experience. For me, it gives me the power over my own narrative and turn it into something positive.

"I will continue to raise awareness of premature journey's and forever say a massive thank you to all the staff that were and still are involved."