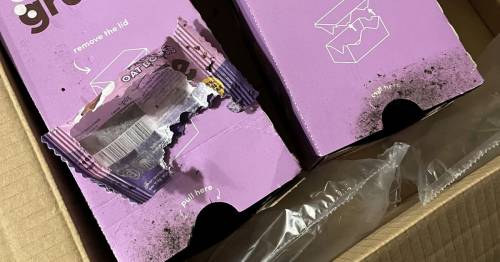 A disgusted mum has blasted Amazon after receiving her delivery of Graze cereal bars that had already been sampled by mice – featuring "tiny teeth marks and mouse droppings".

But when she and her husband Justin opened the parcel, she claims one of the snacks had already been eaten.

The business owner then said she made the stomach-churning discovery of an open wrapper "poking out" covered in "tiny teeth marks and mouse droppings".

When Justin, 43, complained to Amazon, Fiona said they were simply offered a replacement for the £16.89 order without promising to investigate how it happened.

The mum-of-three is now calling on Amazon to investigate a potential warehouse issue she believes caused the 'revolting' delivery.

Droppings were supposedly found on the packaging
(

Amazon said they are now investigating the issue and "working with the customer to make things right".

Fiona, from Chorley, Lancashire, said: "It was disgusting.

"You can see the packet and it's got chewed teeth marks around it. There are black drops that look like mouse droppings and bits of the oat biscuit scattered around.

"It's definitely an animal that's eaten it. It's got tiny teeth marks and there are mouse droppings on it.

"You can see on the box and the wrapper. You can see droppings and pieces of oat."

Fiona told how one box was not touched but the other two had been and that there were "black marks all around where some kind of vermin has been on top."

She added: "My husband ordered and spoke to Amazon online. They said 'alright, we'll just replace the box'.

"They didn't want photographs of it and it felt on their side they weren't going to take any further action. That's why I wanted to name and shame them on Facebook.

"I'd expect them to open a case and investigate the matter. There's clearly an issue at the warehouse."

The cake-making business owner, who bakes from her home, plans to report the incident to the Food Standards Agency.

Ms Leary believes there is an issue at the warehouse
(

She said: "I bake cakes for a living and have to go through hygiene standards for my job. This is revolting for me.

"I've done my food hygiene standards certificate and I keep my kitchen clean. Making sure no pests get in is a priority.

"We won't be eating two of the boxes now, they'll be going straight in the bin.

"I'm going to report them to the Food Standards Agency today. It needs some investigation, especially if Amazon is going to start selling more food products."

An Amazon spokesperson said: "We are working directly with the customer to make things right."

A Graze spokesperson said: "We'd like to offer our sincere apologies to Fiona for this experience and any concern caused.

"Ensuring that our products can always be enjoyed in the highest quality and condition is our priority and we're working closely with Amazon to urgently understand how this order has been delivered in this condition."

Previous : Mums win apology for callous actions of 999 workers at scene of crash which killed sons
Next : Jockey pulls off astonishing 999-1 win in tough conditions and scoops special prize