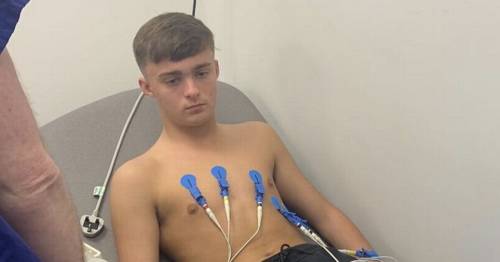 A teenager "almost died" when his lung burst after inhaling laughing gas at a festival.

Alex Littler was rushed to hospital on Monday after complaining of a swollen neck, breathlessness and that his chest felt like "popping bubble wrap" when touched due to the air leaking from a ruptured lung.

The 16-year-old was forced to confess to doctors and his devastated mum Cathy Mccann, 44, that he'd inhaled nitrous oxide over the weekend while at Parklife in Manchester.

The year 11 student was diagnosed with a ruptured and leaking lung by medics – and was told he was lucky to be alive;

However, doctors warned he may need surgery to remove air that was trapped around his lungs and heart.

He had to be honest with doctors about inhaling laughing gas
(

Nitrous oxide is bought in canisters and used legally for anaesthesia or as a propellant for whipped cream.

However it is sometimes pumped into balloons to be inhaled by those hunting for a "high".

Beauty therapist Cathy says the ordeal was terrifying and Alex has vowed never to inhale the drug again, admitting that he didn't know the dangers.

Cathy, from Ellesmere Port, Cheshire, said: "He's said it's the worst thing he could have done.

"He didn't realise himself what the dangers were and he did it because all his mates were doing it.

"I come home from work Monday night and he was in bed. I asked what was up because he never goes to bed and he said his chest was dead tight and he felt breathless.

"When I pressed on his chest it was like bubble wrap, he was in pain and his neck was swollen.

"You only had to press it a tiny bit and it was crackling and crunching. I panicked and dialled 111.

"They said to take him straight to hospital. The doctor listened to his chest and felt the popping.

"I'm panicking, they're asking questions, about whether he's had injuries, been squashed in a crowd, been weightlifting or done anything that could have caused the damage.

"He said no to all of those so they told him to be honest and asked what he'd taken because we said he'd been to Parklife."

Alex's X-ray of his lungs
(

Alex and his mum Cathy
(

Alex was forced to confess he had tried laughing gas ballons, prompting his mum to "burst into tears".

She said: "I couldn't believe it, he said he hadn't had anything.

"His lung has got a hole in it. The gases can affect on your spinal cord, go to your brain and deaden your brain.

"I was beside myself because I didn't know the full facts about these gases. He was petrified."

Alex claims that he's tried the drug before but has promised his mum that he and his friends wouldn't touch it again.

Doctors found that Alex's lung had been leaking and started to repair itself leaving air trapped around his lungs and heart.

Overnight oxygen was used to remove the trapped air without Alex having to undergo an operation.

Cathy said: "His friends are devastated, they've been on the phone constantly, putting posts on snapchats saying they don't want to see anyone doing balloons.

"I don't think half of them knew the depths of what they can do.

"He's been told by doctors, if he does it again, he'll be back in hospital because he has a weak spot on his lungs now.

Alex at the festival
(

He inhaled the gas at Parklife Festival in Manchester
(

"It's a danger because if it hadn't repaired itself it's going to make a bigger hole and it would have been fatal.

"He would have ended up dead or paralysed or brain dead.

"Alex was totally shocked. That's when it hit him – seeing your mum sitting there crying because we're a close family."

Doctors told Alex he is lucky to be alive and the 16-year-old has vowed not to do it again.

Cathy added: "He's not in trouble because it's been that much of an ordeal, he's learnt a big massive lesson so I didn't need to say anything to him."

Cathy and Alex are sharing their story to warn against the dangers of the party drug.

Cathy said: "I don't think parents know the concept and what they are because some people think they are just party balloons.

"No one knows the depth and consequences. 16-year-olds are dying, people have messaged me saying their son died.

"I want to put it out there, the dangers of it for parents as well not just the kids. They don't know what's happening, it's happening under everyone's noses.

"Parents should go to the parties they're going to and see what's going on because they're all doing it."

On Wednesday Greater Manchester Police shared images of industrial bins filled with kilos of nitrous oxide canisters that had been seized by officers around Parklife festival.

Police wrote: "One of our public promises is to prevent and reduce crime.

"So, as part of our community operation for Bury South, Parklife festival officers seized several kilos of nitrous oxide."

The sale of nitrous oxide for its psychoactive effects was made illegal after the Psychoactive Substances Act in 2016, but it is not currently a crime to be caught in possession of the drug.

Previous : ‘Keir Starmer needs to get real and put pressure on PM after ethics adviser quit’ – Keir Mudie
Next : All train ticket offices could close to save £500m as union says plans show ‘no respect’