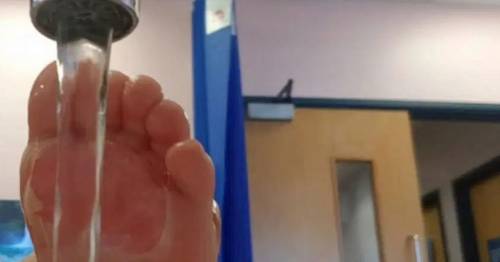 A mum has shared how her toddler's feet were left with horrifying burns after he stepped on the scorching tiles of their kitchen during the heatwave.

Nurse Natasha Trevethan, from Plymouth, Devon, shared the "awful" experience on social media saying she would never want any other baby to go through what her "poor" son suffered.

Sharing shocking pictures of the raw skin her son's feet were left with following the freak accident, she said she never realised her kitchen tiles could overheat to such extent.

Her son stepped on them on Sunday and as he didn't have the reflexes to jump off them immediately, the soles of his feet suffered terrible burns.

What are your thoughts on this? Let us know in the comments section below 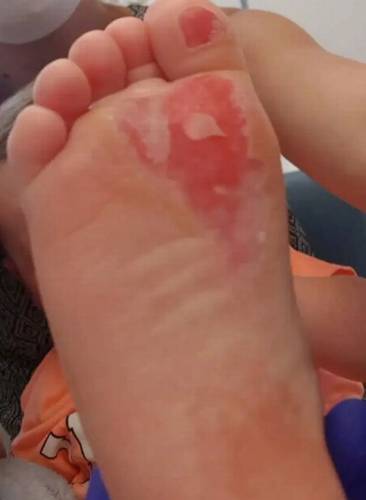 Nurse Natasha Trevethan only realised what was going on when her son started screaming in agony
(Image: FACEBOOK)

A heartbreaking picture of the 22-month-old boy after the gruelling treatment shows him looking gloomy as he sits in the back seat of his car with his wounded feet in bandages.

"I thought I would share our awful experience on sunday with our poor little boy Louie to raise awareness," the distressed mum said on Facebook.

"There was no way we would ever have thought this could be a result of our kitchen floor! At 22 months old he didn't have the reflexes to hop off the hot tiles. He just stood there and screamed until I could get to him and scoop him up.

"I would hate for this to happen to anyone elses baby." 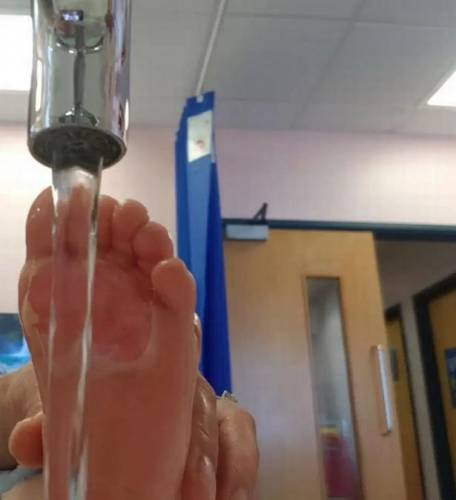 The boy was taken to hospital and treated in the Minor Injuries Unit
(Image: FACEBOOK)

The toddler was taken to hospital and treated in the Minors Injuries Unit, the nurse said.

It comes as Brits up and down the country sizzle in an unprecedented heat wave that has brought temperatures to 33C in some areas.

The Met Office on Monday issued its first ever Extreme Weather Warning, which is in force till Thursday in England and Friday in Northern Ireland.

The temperatures are currently so hot that the tar on some of the country's roads has caused the highways to 'melt like chocolate.'

In Gloucestershire emergency maintenance had to be carried out as part of the A38 was deemed unsafe. Grit was poured on top of the melted tar to solidify it and re-attach to surfaces.

Somerset County Council also say road surfaces across the county have begun to melt due to the scorching temperatures.

The local authority has deployed highways teams to treat the affected roads.