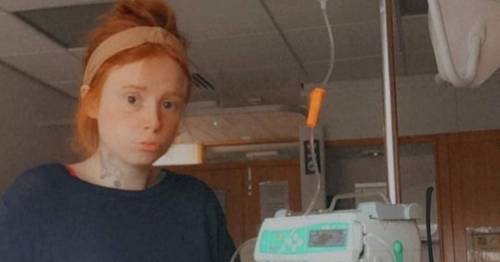 Emily said experienced the "darkest moments" of her life during the pandemic, says partygoers do not "know what its like to be living in fear."

It was revealed this week that Boris Johnson had invited more than 100 people to a "bring your own booze" garden party at Number 10, in May 2020, when guidance was to meet no more than one person at a time.

The revelation has sparked fury from people across the UK, who were forced to make heartbreaking sacrifices during the pandemic.

Emily, 27, who suffers from depression and is believed to be autistic, struggled to cope with the isolation she faced as a new mum during the pandemic.

In April 2020, just three weeks after Covid-19 restrictions were first introduced in the UK, she was rushed to hospital because she couldn't feel her baby moving.

Having suffered two miscarriages in 2019, Emily, from Gwynedd and her partner Adam were terrified, but due to strict Covid measures, her family couldn't be with her.

Thankfully, her daughter Melody was delivered safely, but being isolated from the her loved ones took its toll.

Emily Roberts had to give birth alone
(

"When we got home the reality of being truly alone with an autistic family to care for and newborn hit even harder," she told NorthWalesLive.

"I cried almost every day and was displaying symptoms of postpartum psychosis on top of post natal depression.

"Our parents and wider family couldn't visit – they didn't hold our new daughter for the first two months of her life.

"We had no friends to support us, only I had one visit from my best friend who was also pregnant at the time, we were masked and distanced.

"And we've just learned what MPs and their staff were up to while we were all struggling – I didn't even lose anyone to Covid in that time and I feel like we were really wronged, I can't imagine how people who've lost loved ones during that isolating time feel.

"Boris and other MPs keep saying they "feel" people's anger, loneliness, that they sympathise.. but they don't have a clue really.

"I didn't lose a loved one but I lost myself in those lonely months and haven't recovered."

At Prime Minister Questions, Boris Johnson apologised for attending the gathering and acknowledged the public “rage” over the incident.

Mr Johnson told MPs that he attended the event to “thank groups of staff” and "believed implicitly that this was a work event."

Emily Roberts said the Prime Minister's are "insulting" to everyone who made sacrifices during the pandemic.

"I didn't get to share and enjoy my babies firsts properly while MPs were sharing and enjoying drinks and company," she said.

The scars left by her pregnancy with Melody resurfaced when Emily gave birth to a son, Joseph, in December last year.

The vulnerable young mum is forced to relive the trauma of what she experienced and she now suffers from flashbacks.

It totally clouded my birth and postpartum experience.

"Again, I'm suffering really bad PND and on a waiting list to get help- the mental health services are under so much strain.

"And I will forever be heartbroken and upset with the MPs (especially Johnson) for just acting like they're above the rules, above the law.

Previous : Prince Andrew spotted with Fergie for first time since royal stripped of his titles
Next : Analysis: Rise in real bond yields may slow but not stop stock market bulls