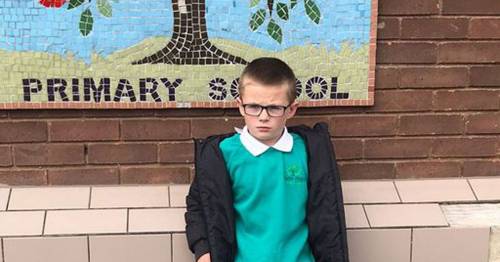 A furious mum removed her autistic son from school when he said he was forced to drink tap water in a "game", despite teachers knowing he only drinks juice or from an Evian bottle.

Marie Donnelly says a staff member spotted her son Larsson Hankins, seven, not drinking from the school’s reusable bottle and took him out of class to “play a game.”

She accused them of lying to her son, claiming her son was told he had to have a drink as his mum was concerned which she refutes every saying.

Larsson – who only drinks juice or Evian, was presented two cups of water and asked to guess which was from a tap.

When he could not determine which was which, Marie alleges Larrson was told they were both tap water, leaving him in tears when he got back to class, Hull Live reported.

Maries, 36, from Hull said: “As Larsson is autistic, he struggles socially and for him to be alone in a room with a staff member he doesn't know well and to be pressured into having to drink water will have caused him a lot of stress.

“School life is already hard for Larsson, so I don't like that they're making things harder for him, especially the way he was spoken to.

“I'll do whatever I have to do to make him happy and make school less stressful for him."

When his dad went into school to complain the family claims he was told “autistic kids drink water” to which he replied: “This one doesn’t.”

In response to the claims, Bude Park Primary School said: "Staff and governors of the school are committed to safeguarding and promoting the health and welfare of its children.

“This year, the school purchased water bottles for all of its pupils. These bottles are kept in school and ensures all children have access to plenty of safe drinking water throughout the school day.

"The school prides itself on being inclusive and endeavours to support every child regardless of their level of need. The school has accommodated pupils who have found the transition to water-only more difficult and will continue to work with parents and pupils to ensure that all children are appropriately supported to make healthy choices.

"Whilst this initiative has been widely supported, the school encourages those parents who have concerns to raise these with the headteacher and/or via the school’s complaints policy."