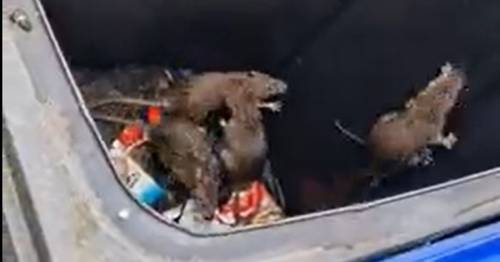 This is the stomach-turning moment a mum opens her wheelie bin to discover nine leaping rats scrambling to get out.

Mum-of-six Debbie Burns was left horrified after rats piled into her grey general waste bin in her village – as they tried to desperately make an escape.

The nine rats managed to make their way inside by nibbling a hole at the top, before they became trapped, the Daily Record reported.

Debbie claims since the clean up of a fly-tip dump behind homes – which saw 155 tonnes of rubbish removed from a motorway embankment at a cost of £50,000 – residents nearby have been tormented with rats.

She says her children – aged between 18 months and 17-years-old – have been unable to play outside over safety fears.

Debbie added: “I have six kids in this house and can’t let them out in their own garden to play due to the whole street being plagued by rats since BEAR Scotland cleared the embankment behind the houses and disturbed the nests.”

BEAR Scotland, a maintenance and management firm in Scotland, say that “extensive fly-tipping” is to blame for the issues.

A spokesman said: “When we were originally made aware of issues with vermin in this area we investigated and a programme of pest control was undertaken.

"However, the main issue was identified as extensive fly-tipping on Scottish Minister’s Land to the rear of the properties in Wallace Crescent.

“As a result, in February we completed a clear-up operation that saw the removal of 155 tonnes of waste material.

"The job had originally been estimated to cost over £20,000 but ultimately exceeded £50,000 due to the amount of material that had built up.

“We kept the residents updated to the situation, giving them information on how to contact us.

“It is suspected that this waste was a key contributing factor to the original issue.

"We have recently been made aware that there is an ongoing situation with vermin and our specialist pest control contractors have been tasked to undertake a further programme to treat the area.”

Wallace Crescent is being plagued
(

Wallace Crescent, in the village of Plean, has 200 houses and the side that bounds the motorway is around 200-300 yards long.

Debbie says that she contacted the council last month to arrange for pest control to attend but that nobody ever showed up.

A spokesperson said: “We realise this has been an alarming situation for residents and will be contacting council tenants directly to provide pest control treatment at no cost to them.

“In the meantime, we would encourage people to dispose of waste and recycling responsibly, using the facilities provided either at home or at recycling centres.

"The council regularly highlights fly-tipping as a crime that blights society, and this is one example of how negatively it can impact communities.”