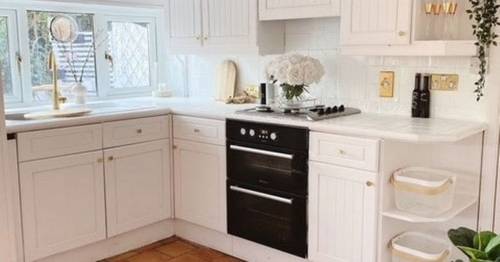 A mum-of-two has completely transformed her former "depressing" kitchen for £100.

Becky Lane, 34, recently moved to Surrey from London with her husband, Adam, and their two children, Amelia and Freddie.

The events planner, who has an Instagram page @21oakham tracking her home renovation projects, said she worked on the room's transformation while her two young children were asleep, reports the Liverpool Echo.

Revealing her plans to Tap Warehouse, Becky said: "It was mainly all paint that the money was spent on.

"I bought four pots of Wilkinson chalk furniture paint (£10 each) as I wanted a matt finish instead of satin or gloss. 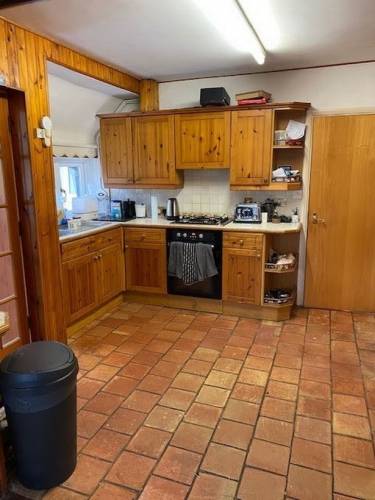 "I painted the tiles in Ronseal for £10 tile paint and then used a varnish over the top for £9.

"For the floor, I used an extreme power cleaner with a drill brush scrubbing set which I already own from another project. Then for finishing touches, door handles which are £14 from eBay and spray paint costing £15."

The transformation was completed over one weekend and a few evenings.

Becky added: "The kitchen was dark pine and not to our taste, but also made the space feel very dark and depressing when we wanted a lighter, airy, modern feel. 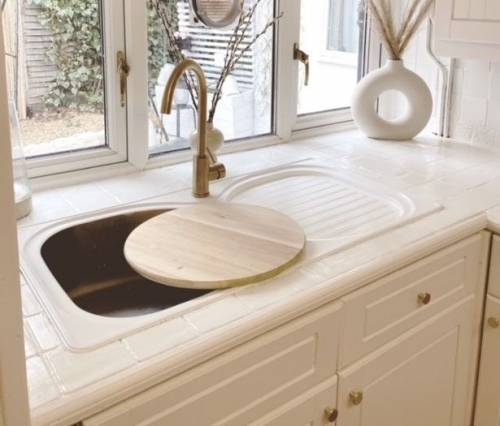 "To begin, I sanded and cleaned all the units, panelling and tiles. I painted tiles first after preparing the area and masking up the switches and sockets. I did three coats on the tiles.

"If others were doing this project without panelling, [they] would have only needed two paint pots which would also save even more money.

"After this, we did a two-coat all over and a varnish to the tiles to harden the finish. While everything was drying, I started the project to clean the tiles.

"I spent about four hours straight on them and could have easily spent days on them, but I got them to a clean level.

"Once all the paint was set, we were left with a silver steel sink which didn’t go at all with the gold fixtures. However, as I've never seen a sink spray painted before, I was worried the paint may chip away due to use.

"We decided to leave the basin as it gets the most amount of wear but spray the sideboard and the surround. We feel it's really set off the kitchen and love it.

"Then the final job was adding the new gold handles which also help with finishing the full look."