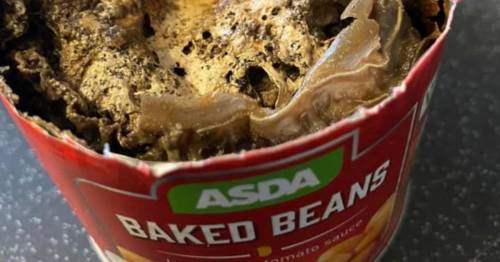 An Asda customer was left horrified after opening a tin of beans and finding what "looked like a mouse had died" inside.

Sally Jones said she felt sick after opening the tin of Asda's own brand baked beans from her local store in Bexleyheath, south-east London, last Saturday.

The 29-year-old accounts manager claims she bought the beans last month and was making lunch for her son Reign when she made the disgusting discovery.

Images show the opened tin filled with brown sludge and mould with barely an identifiable bean in sight.

The can opener and lid is shown laying in the background beside the vile tin of 32p beans.

The standard red, tomato sauce has been replaced with a pool of watery brown substance – resembling meat that has gone out of date.

Mum-of-three Sally also took a photograph showing the base of the tin which gives an expiry date of January 2023.

She shared images of the revolting beans on Facebook on Saturday January 8, writing: "I'm gonna be sick 10,000,000 times. I just opened a tin of beans to try Reign on for lunch and this was inside.

"It's in date, only purchased recently. What the actual hell.

"My stomach right now, what is that. Not feeding my kids things from a tin or buying from the Asda brand ever again."

Dozens of disgusted viewers left comments on the post after being equally as horrified.

Stevie Ferdinando said: "I would never shop in Asda again. I hate the shop anyway, it's getting worse. Email them with this picture."

The tin of beans was filled with mould
(

Jennifer Bensaidane simply said: "F**k. I find it hard to look at the photos and it's very rare I swear but that is disgusting.

"Are you taking it all back to show them? I hope so, you might get some compensation."

Samantha Greenwood said: "It looks like a gremlin about to hatch. Why do these things always happen to you?"

Dee Reynolds said: "Where is the vomit reaction? It looks like a scene from a scary sci-fi."

And Leah Cee said: "Don't inhale any of that. Bag it up and leave it outside in the bin.

"I swear breathing in rotting, tinned food can cause botulism."

Sally bought the tin from an Asda near home in Bexleyheath
(

Speaking today, Sally said: "I bought the beans just before Christmas, but when I opened them on Saturday I could tell something was wrong immediately.

"As soon as I opened it the smell was like something from beyond the grave. It was horrific. Like a mouse had died in that tin.

"I spoke to Asda both via email and on the phone, but they weren't helpful at all.

"I sent photos but they did nothing except offer me a refund.

"I still have the tin, I'm considering sending it to food health and safety!"

A spokesperson for Asda said: “We set ourselves very high standards and on the rare occasion a tin is damaged it can lead to a build-up of mould.

"We have not received any complaints about our beans so would recommend any customer that is unhappy with a product to bring it back to store or speak to our customer service team so we can look into what has happened.”