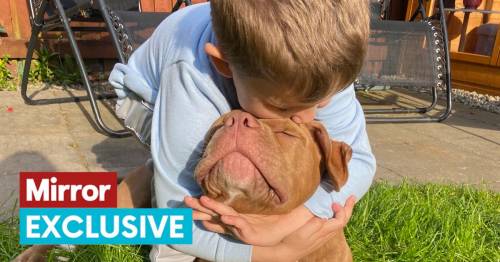 A single mum has been left homeless with her son and new puppy after a devastating fire destroyed their home and belongings.

Megan Thomson, 23, from Stirling, Scotland, is currently living in a Travelodge with her five-year-old son Ellis and four-month-old bulldog puppy Pablo.

Last Thursday, her kitchen cooker started a fire in the third-floor flat on Clayhills Drive – and poor Pablo was trapped inside.

Neither Megan nor Ellis were at home, and thankfully her boyfriend Marc Findlay, 23, managed to get Pablo outside.

Megan told The Mirror : "I rushed straight there. I kept thinking that my puppy was going to die.

Megan and Ellis are now homeless
(

Her precious flat is inhabitable
(

"I was so worried about my flat. I've spent four years getting it the way I wanted it and I'm really house proud.

"I was homeless with my boy when he was six months old then we were given that flat. It means a lot to us."

Megan, who is a self-employed eyelash technician, left her flat at 4.30pm to go to the studio, and less than an hour later, she got the call from Marc.

She said: "Marc couldn't see because the kitchen was totally black but he managed to shut the doors in the flat. There was a lot of smoke."

Smoke damage left the flat inhabitable, forcing Megan and Ellis, who has been recently diagnosed with autism, into a one-room hotel until they can find temporary accommodation.

All of their belongings are gone
(

Megan is devastated to start from scratch
(

Megan said: "I feel lost. Ellis doesn't know what's going on. I've not explained it to him as he'd get confused."

She managed to grab some clothes for the pair of them, but wasn't allowed to take anything else.

She added: "We couldn't get any of Ellis' toys so he's quite bored in the hotel room.

"We have a double bed and two single beds with bags of clothes everywhere.

"It's stressful not having a washing machine or cooker."

Megan only became self-employed three weeks ago, after working full-time in the prison service.

She feels lost without her flat
(

Pablo was lucky to survive
(

She has decided to take some time off work while they find a permanent place to live.

Megan said: "I don't want to leave Pablo alone in the Travelodge. The fire alarm went off as a test the other day and he jumped up and got really scared."

When Pablo was rescued from the fire, he was covered in soot and was struggling to breathe.

Megan said: "He was quite wheezy and kept coughing. They observed him overnight and gave him oxygen and an injection to open up his lungs. He was really lucky."

The vet bill came to £600, which Megan had to pay upfront, and is now waiting to see if her pet insurance will cover – though she fears it's unlikely.

Friends and family are asking for kind strangers to help
(

Megan's friend, Caitlyn Gardner, set up a GoFundMe page to try and raise money for the vet bills and new belongings.

She wrote: "We thought this would be a good start to helping our girl Megan who has almost completely lost her home due to a fire.

"We are so saddened to hear her and her beautiful little boys home has been ruined due to this.

"They are currently staying in the Travel lodge and are unable to go back home due to the state of the flat.

"Their puppy Pablo has been in the vets since last night on oxygen as he was in the flat with the fire when it happened.

"If anyone could help it would go a long way as Megan is having to start all over again on her own to fix a home she has spent years trying to get just how she wants it.

"Thank you in advance if you do as it would mean a lot to them."

Megan praises her friends and family for being "amazing".

If you would like to help Megan get her life back on track, you can visit her GoFundMe page.

Do you have a story to tell? Contact nia.dalton@reachplc.com.