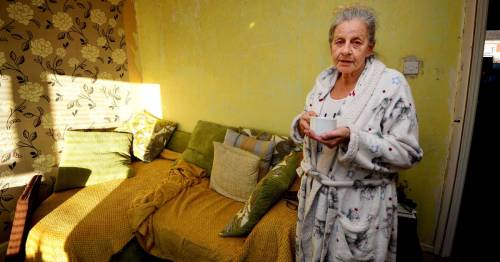 A mum wants to abandon her home of five years after claiming the damp is so bad she fears the walls will collapse on her and getting into bed feels like having "a shower".

Linda Richards, 60, says her bungalow in Seacombe, Wirral, is covered with mould and weeds from the damp walls and describes getting into bed as having a shower without drying off properly.

She claims that the damp is so severe it is causing her health problems, bringing her out in hives and leaving her suffering with headaches, Liverpool Echo reports.

The mum who has mobility issues said she wants a new home from Magenta, who owns the property, because of the problems.

She said: "There is green mould growing on the floor of the bedroom and the tiles in the kitchen have begun to lift because of the moisture and weed branches growing under the bungalow.

The terrified mum feels the walls could collapse on her
(

She added: "I don't want to leave here, it breaks my heart, I love the area and my neighbours, but I have asked Magenta to rehouse me elsewhere or swap me with vacant homes close to me because the damp is bringing me out in hives, I get headaches and have breathing problems but they have refused – the communication has completely broken down."

Linda also fears the outer wall of the bungalow will crumble and collapse as a result of the build up of moisture affecting the structure of the property.

Linda says she has been battling to solve the problems
(

Magenta Living said it is now looking to work with Linda again to help solve the issues, but said some issues had not previously been raised.

A spokesperson said: "Following contact by Ms Richards about conditions within her home, Magenta Living has previously attended the property to inspect her issues of concern.

"The Property Surveyor noted that there were issues with the kitchen floor tiles but the offer of having the floor repaired was unfortunately refused.

She says weeds are growing up through the floor
(

"No other remedial work was highlighted as needing to be carried out at that time.

"However, Magenta Living will now again liaise with Ms Richards to arrange a further inspection of her home and we will assure her that we will arrange for our contractors to carry out any repairs identified as being necessary.

"We will also offer advice about her rehousing options."

Previous : Model told to cover up ‘inappropriate’ top before boarding flight with family
Next : Brazil reels as Omicron spreads, weighing on hospitals and economy