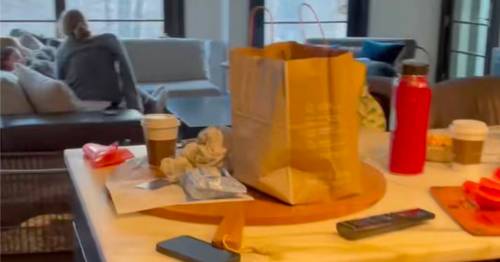 Leaving your children in the hands of a babysitter can be a nerve-wracking experience for any new parent – or parent in general.

Will everything be OK? Can you trust the babysitter? Will there still be a house to return to after your evening out?

It's entirely natural – and many other parents admit to feeling similarly.

One mum went viral recently after sharing how her home looked after the babysitter had looked after her children – and it's safe to say she wasn't impressed.

While her children were fine, she wasn't happy with the mess left behind – and shared a viral video on TikTok.

On the kitchen counter, there's a large paper bag and a coffee cup, along with a few items. Then she pans to a cutting board that has grapefruit peel left on it and a few half-eaten plates of food.

She shared the video, and wrote in the caption: "When you come home from date night and the new babysitter left your house like this…"

People were left divided in the comments, as one wrote: "A babysitter isn’t a housekeeper or cleaner tho," while another added: "They are there to keep your kids safe and supervise."

A fellow mum added: "As a mom with *crazy wild* toddlers, I NEVER expect our babysitter to clean up after them. I do appreciate when they clean up the mess."

Another wrote: "I really think this is a generational thing. Back in the 90s when I babysat, we cleaned up after the children and ourselves. Common decency."

A babysitter added: "As an experienced babysitter it’s common courtesy to clean. Sometimes I’d even clean dishes/messes I didn’t make."

"As a nanny, I clean up but sometimes it’s hard to do things with children and moms of all should know that.. maybe have a talk instead of posting this," advised another.

"I always cleaned up when I babysat. No one’s asking you to vacuum or do all the dishes but at a minimum clean up toys/food," wrote one commenter.

"Y’all it’s just the disrespect..if the table wasn’t like that when she arrived, & she made a mess with the kids cooking/playing …clean it up," added one person.

Another wrote: 'The ppl saying a babysitter isn’t a cleaner. Did ur parents not raise you right? Who makes a mess in someone’s house & doesn't clean up after themselves?"

Previous : Mum shares how she saved £2,000 on furniture by upcycling instead of buying new
Next : Vladimir Putin warns Finland joining NATO is a ‘mistake’ and will be ‘security threat’ – World News