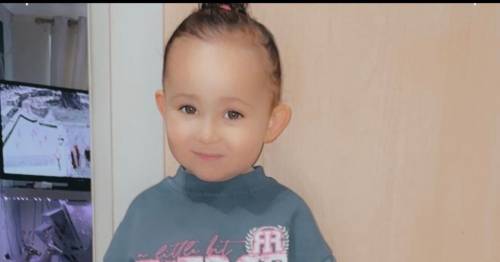 Mum ‘knew something was wrong’ when daughter, 2, kept touching back of head

A mum has described how she knew something was wrong with her two-year-old daughter when the toddler kept touching the back of her head.

Ivarna Kagbo, from Norris Green, had been unwell for a number of weeks before she was admitted to hospital after complaining of a sore head and losing her appetite.

Her mum Kerry also noticed she kept touching the back of her head as she complained about the pain.

Doctors at first thought the toddler could have an infection, however her health soon deteriorated and by December Ivarna couldn’t walk without being supported, reports the Liverpool Echo.

And it was on December 17, after a head scan that her mum was given the devastating news that her daughter had a brain tumour.

The tumour was causing an increase of pressure on Ivarna’s brain and the following day she underwent surgery to have fluid drained.

On December 20, she had a ten hour operation at Alder Hey children's hospital to remove the cancerous brain tumour.

Family friend Antoniya Conroy, who has organised a fundraiser to send Ivarna and her family to Disney World once she recovers, spoke about the immense difficulties faced by the family.

She said: “I’m friends with Ivarna's mum Kerry, who’s only 24. She’s devastated. Just devastated over it.

Ivarna with her family in hospital
(

“I went in to see Ivarna earlier this week. She’s got weakness, she’s still got pegs in, her feed coming out of her nose.

“She’s doing better than they said she would, but she’s nowhere near what she was.

“I think that it’s so sad that a kid has to go through that, but she’s just getting on with it.”

After the operations, Ivarna’s family were told after that she wouldn’t be able to walk or talk and would have to learn how to use her limbs again.

And on Christmas Day friends and family went to the hospital on and stood outside her room, so that she knew that they were all there.

Ivarna now needs a wheelchair and her family have been told that funding may be required for trial medicine to treat her condition.

Antoniya added: “We set the GoFundMe up originally to try and put some money together from friends and family.

“You don’t know how much they’re going to turn around and say – how much trial medicine is going to cost.”

“The Disney idea was to give the family something to look forward to. We wanted to do something personal for Ivarna.”

At the time of writing, Antoniya’s fundraiser had received donations totalling almost £6,000.

Anoniya added: "It’s one of those stories where you think it would never happen to your family.

“A little girl complaining of headaches and the next minute she’s been diagnosed with a brain tumour. It’s something you just don’t hear of really happening to a two-year-old.”

You can view the fundraiser and donate by clicking here.