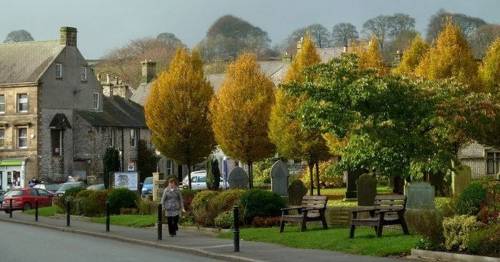 An influx of holiday homes, coupled with the rise in popularity of staycations, is pricing many local residents out of their own villages, it's claimed.

One holiday hotspot that's been heavily affected is the picturesque village of Tideswell, near Buxton in Derbyshire.

The stunning area lies in a wide valley on a limestone plateau, and while it's popular with holidaymakers it's coming at a price for those who call it their permanent home.

One local said holiday lets are popping up "practically everywhere you look", with the Peak District village proving an ideal place for a UK getaway, DerbyshireLive reports.

Many popular staycation spots across the country have seen wealthier "outsiders" buy properties on the market to then convert them into holiday lets, reducing the availability of properties for those from the local area.

The picturesque village of Tideswell, Derbyshire
(

In a recent council meeting, mum Sharon Bates was reduced to tears as she claimed holidaymakers had forced house prices up so much that her sons had to leave Tideswell, a village her family have called home for four generations.

"It's only in recent years that they've moved away due to not being able to afford property in the village.

"The park is a beautiful place to live and it makes me sad that our children and other children don't have the opportunity to stay here.

"Most properties end up as holiday cottages."

Other locals have voiced similar issues and concerns to Sharon.

Kay, who runs Kay's Salon in the village, explained that she had to move out of the village following the passing of her mother as she couldn't afford to live in the area.

"I was born and bred in the village but I have to live in Buxton at the moment because it is just too expensive here," she said.

"As a business owner in Tideswell I see the positives of having more people visiting the area but from a personal view I don't like it.

"I think they [holiday let owners] should pay higher council tax because at the end of the day a lot of these 'second homes' are just a business for them."

Across the Peak District, many villages and towns have seen a rise in holiday lets – with one local believing the coronavirus pandemic hasn't helped matters.

Taking some time away from maintaining her garden, Miriam Sellers said she thinks that when people realised they didn't need to go abroad, they came up north on holiday and then decided to purchase houses in the countryside.

"I am surrounded by them [holiday homes]," said Miriam.

"To my left, to my right, in front of my house, behind my house, all of them are holiday homes.

"Last thing I heard was that Tideswell has 350-400 holiday homes in the village and I'll tell you that traffic has done damage to the area.

"Narrow streets lined with cars, the pavements have been fixed a dozen times from large vans having to drive on the curb."

Cars and pedestrians alike travel past the docked boats in the seaside town of Whitby, Yorkshire
(

Miriam, like Sharon, expressed concern over the lack of permanent residents living in the area, with her saying that you are lucky to find a homeowner in Tideswell under the age of 60.

Having lived in the village 76 years, Miriam described how she believes over the last decade holiday homes have been on the rise.

"I do think in 20 years if something isn't done, the majority of Tideswell will just be holiday lets," she added.

"It is a shame because the village used to have so many independent shops and now is almost a shadow of what it used to be when I was your age."

Recently in Whitby, Yorkshire, a referendum was held among residents to decide the future of second homes or holiday lets in the seaside town.

An overwhelming majority voted to end second home ownership in the town and whilst the vote did not carry any legal weight, it does represent the views of the population and could help shape local planning considerations.

Councillor Neil Buttle, representing Tideswell, said that holiday lets has been a subject raised regularly by locals, and councillors understand the difficulties.

Cllr Buttle said: "The Whitby solution does not usefully apply in the Peak District as development is limited to affordable homes only. Most include a ‘Derbyshire Clause’.

"Our council is capable of complicated tasks. Creating a system that is fair to residents, businesses, and second home owners would be complex, but not beyond our competence, if we had the right financial tools.

"In my experience, local councillors recognise the difficulties, but in my opinion are not able to manage the trend due to a lack of central government interest in the issue.

"On a more positive note, Derbyshire Dales District Council alongside East Midlands Housing Association are applying for planning permission for a small development of 20+ highly energy efficient and affordable homes in Tideswell.

"If the resident quoted at the council meeting has her sons on the ‘in housing need’ list there is a fair chance they will be able to return. I do hope so.

"Tideswell is a great place to live and the community continues to thrive. Being forced to see your children move away must be tough."

Previous : Mum’s shock as son, 3, found soaking wet and alone after walking out of his nursery
Next : Baby ‘nearly suffocated’ after Stacey Solomon Primark bowl ‘suctioned’ onto face