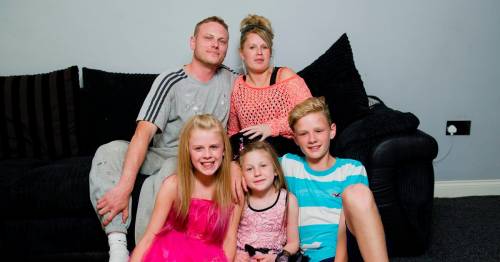 A mum who is happy to have no carpet in her home so her kids can walk around in designer clothes said she does it so people believe she's a good parent.

She said she feels people will think she's a better mum if she dresses her kids in pricey gear – with seven-year old Mackenzie and 14-year old Rhys also looking the part.

They starred in Channel 5 documentary 12 Year Old Shopaholic and Other Big Spending Kids in 2014 and the clip has just resurfaced on social media.

It left users' jaws on the floor as Kelly and push over husband Alan from Bexley, south east London, gave in to their demands.

“People would say ‘you’ve got no carpet but your kids’ running around in Lacoste’,” Kelly explains on the programme.

“We are crap with money, we don’t have savings, we live everyday as it is.

“I had my kids young and I felt like if I dressed them in designer gear then people would think I was doing an alright job.

Chase and fellow pre-teen shopaholics featured in a documentary
(

“The minute they were born they were all in designer clothes. I wanted my kids to look nice.

“We could have loads of bills and I could still go to bed and sleep. Things like that don’t worry me.”

Viewers were stunned to see the mum confess that she can't afford to put carpet down because of the spending.

The show focussed on spoiled Chase, who refuses to shop on the high street.

The kids say they often get £300 each per week to spend on looking good.

"If I ask dad for something and don’t get a yes straight away I give him 'The Face'.

"I like labels….Ralph, Juicy, Gucci. I don’t do Primark!"

But she said they couldn't afford carpet for the family home
(

The couple say they do sometimes struggle to keep up with their children’s constant demands.

Kelly stays at home to look after the kids while her husband runs his own building company.

She went on: "We are useless with money but we’re not on benefits. Alan works for it."

"My mum always said 'you’re not here forever so spend it while you can' and I think she’s right."

Previous : Greene King drops plan to sell 6p pints – and gives them out for free instead
Next : Race to raise £100,000 for cancer treatment that could save terminally-ill boy’s life