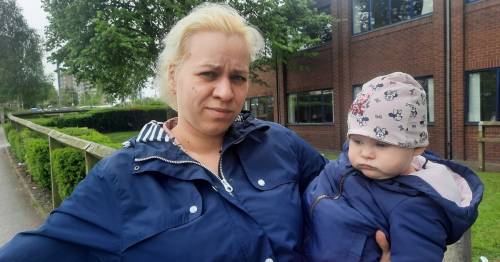 A mum has started dressing her baby daughter in "more and more" layers to try stop her getting cold as energy prices soar.

Greta Bubneliene says her bills have almost doubled and she's had to put the heating on low with wages and Universal Credit barely covering the family's outgoings.

The 29-year-old, from Seacroft, Leeds, is a part-time manager at an Italian restaurant and her husband is a delivery driver.

And they're feeling the bite of the cost of living crisis, reports LeedsLive.

Greta said: “We’re struggling to pay what we need to pay at the moment, our rent is really expensive.

"We’re struggling to live a normal life, I mean like going somewhere on a holiday or even going out somewhere to meet other people.

Are you struggling with the cost of living rise? Let us know at webnews@mirror.co.uk

Greta has also complained about the rubbish outside the job centre
(

“All the bills are growing and growing, getting higher and higher. We used to pay like £300 a month and now it’s almost double.

"We’re just putting the heating on as low as we can, it’s been cold and our windows are not good. When it gets windy, our curtains swing around the windows.

“I’ve been dressing the baby with more and more clothes.”

Greta has also cut down on the amount of meat they’ve been buying.

Visiting the Seacroft Jobcentre, in North Parkway with one-year-old Lily to discuss her Universal Credit payments, Greta also hit out at the amount of rubbish dumped in front of the centre.

There was a discarded bin bag in the pathway, plus numerous pieces of paper and packaging all over the lawn and grass verge in front of the job centre when a reporter spoke to her there on Wednesday (May 11).

“It’s been snowing rubbish,” joked one man who was passing. Greta said it was not an uncommon sight in the Leeds suburb.

The mum explained: “Just look at that, at the amount of rubbish that’s out there.

"In my eyes, it does not look proper. It’s the same in our street, where we’re living. Rubbish is everywhere. They don’t seem to care about the future of nature.”

Members of the Jobcentre staff came and cleared up the litter as best they could – but it was a lost battle with so many pieces of litter covering the lawn.

Previous : North Korea fires ballistic missile in second test launch in a week – World News
Next : Family-of-six sleeping in one room in flat where children believe mice are family pets