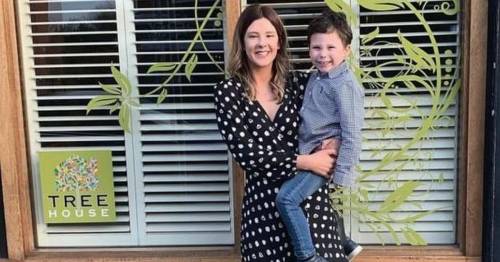 A young mum turned on the TV and discovered the life-threatening real cause of her shoulder and back pain.

Katie Enell, from Crosby, Merseyside, was off work sick believing she had pulled a muscle so killed some time watching the telly.

The 29-year-old had never checked her breasts before and knew she should try when she saw someone on Channel 4 show Embarrassing Bodies carrying out an examination.

She found a lump in her left breast, which was bigger than the size of a grape, the Liverpool Echo reports.

Katie has since been diagnosed with stage four breast cancer which has also spread to her liver and bones.

But the bad news didn't end with the cancer diagnosis
(

In a cruel twist of fate after returning home from holiday on Friday, June 17 the young mum was told the devastating news she also had a brain tumour.

She shared her story in a bid to raise awareness of the importance of cancer patients being offered full body scans to check the disease hasn't spread to other areas of their body.

Katie said: "I had back pain for about six months but I put it down to coming back to work after being off on furlough, lugging heavy tables outside. I didn't have any other symptoms other than right shoulder pain.

"I kept getting a renewed sick note and one night I was watching Embarrassing Bodies on the telly, I don't usually watch telly but with being off work there was nothing else to really do.

Watching Embarrassing Bodies, she gave her breast an examination – and went straight to her doctor
(

"When I switched over to Embarrassing Bodies it was showing you how to do a breast exam, so I just sat in bed and I just copied what they were doing, and for some reason instead of going to the right where the pain was I went to my left and found [a lump] straight away."

She said she assumed she had just pulled a muscle in her shoulder but when the pain continued to get worse she went to see her GP and to A&E.

Doctors initially suspected Katie was suffering from Pleurisy – a condition which causes inflammation of the tissue between the lungs and ribcage – and she was signed off work for five weeks.

Katie said the lump in her left breast was "bigger than a grape" in size and her mum and partner could also feel it.

She said: "I rang the doctors the next morning and to give them their due, they got me in very quickly. I was seen within two days of finding the lump.

"The doctor didn't think it was anything to worry about but she did say she'd refer me to the breast clinic. I was seen in Aintree Hospital within two weeks."

Katie was referred for further tests including a mammogram and ultrasound followed by a biopsy, which confirmed she had breast cancer. Two weeks later on July 14, the young mum was told the devastating news the cancer was stage four and had also spread to her bones and liver.

Katie said: "They ask if you have any questions at the hospital – you've gone from one day being a 28 year old mum, not a care in the world, to your life is in jeopardy.

"The wording they used was it is 'treatable not curable.' At the beginning they wouldn't know how I would respond to treatment because you've got to wait – you have CT scans every three months."

Since starting chemotherapy last summer, Katie has responded well to treatment. During a hospital appointment on June 8, she was told the results of her last CT scan showed the cancer was stable and had continued to reduce in her liver, meaning she could have "years if not decades" to live.

To celebrate the news Katie went on a surprise holiday with her partner to Spain's Costa del Sol – but just two days after returning home on June 17, she was dealt another devastating blow after receiving the results of her MRI scan over the phone.

She said: "I'd sort of forgot about the brain MRI with such good news. The results had come back and they'd found a 13mm brain tumour in the left frontal lobe."

Katie said she requested the scan after she started experiencing stinging and twitching in her left eye which was sensitive to light and doctors agreed this was the best option for her.

She said she can't fault any of the care she has received but she is keen to raise awareness of the importance of cancer patients being offered full body scans, having also met other women through the charity Make 2nds Count, who have had similar experiences.

In a video on Instagram, Katie said: "More needs to be done. We need to be scanned from the head to the pelvis. I could have just not woke up one day. How do you tell my little boy that I could have been saved?

"That he could have had more time with mum if it was just for a scan? That's the reality of it."

Previous : ‘Three quarters of households will see cost of living rise quicker than incomes’
Next : Incredible moment worker gets blown off his feet by huge underground gas explosion