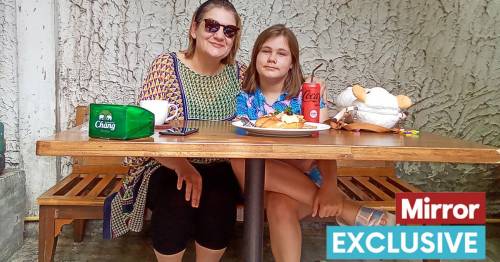 A mum has told how she used the money she saved by giving up booze to fund the holiday of a lifetime – only for her daughter's school to refuse permission.

Kerensa Robertson, 48, from Essex, and Delphi, was denied permission for the three-week tour to Thailand during term time – despite the break being "more educational than school."

The mum-of-one, who started drinking at 13, has been sober for 29 months, and says the holiday was an important way to reconnect and strengthen her relationship with her daughter.

But despite being refused permission, the pair went ahead on the 'incredible' tour – where mum Kerensa says her daughter 'learnt more in weeks than she had in school all year'.

Kerensa said: "The school does not dictate to me what I do with my girl. It’s not as though I’m taking her out of school to sit around a pool in Benidorm getting drunk on the sangria all day.

"Education isn’t confined to four walls in a classroom. She’s learned more in Thailand with me in three weeks than what she’s learned in school all year.

Kerensa, 48, from Essex, was a self-confessed ‘eternal party animal’
(

The sober mum travelled to Thailand
(

When Delphi was growing up, Kerensa was in the grips of alcohol addiction and would drink at least two bottles of wine a night when her little girl was in bed.

She would hide the evidence in the shed but would feel guilty about the impact it might have on Delphi.

The mum said she realised she had to give up her hedonistic lifestyle in 2019 after hitting rock bottom – prompting her to quit booze, and start saving.

Kerensa said: "I was a functioning zombie and the hangovers were daily and constant. I thought this is who I am, a miserable sorry soul. I was in complete denial and it was like a daily brain blizzard.

"I ruined Christmas 2019 with excessive drinking, not eating, vomiting and trying to hide away. I vowed that day to change and asked for help.

The pair on holiday
(

"I went to one AA meeting in January 2020 and got an insight to where I was heading if I didn’t stop as I listened to tragic stories of how alcoholism ruined people's lives.

"Once I had sobered up and my mind was clear, I needed to do something out of this world for Delphi. After the lockdown, she needed some happy memories.

"Plus, we needed to strengthen our relationship. With my sober mind, I realised Delphi needed life experience with me as her tour guide, photographer and chaperone.

"I knew Thailand well and had travelled extensively for nearly 20 years, so I thought it would be the perfect place for us to live like queens for next to nothing!”

Kerensa was denied permission – but says the trip was very educational
(

Kerensa, a specialist admin worker, started researching their trip in November 2021 and booked £300 return flights with Scoot Air leaving on 23 May 2022 for three weeks, just after Delphi’s SAT exams.

And she took £1,000 in spending money as well as her Monzo card to pay for things.

She wrote a letter to Delphi’s school headteacher detailing the activities they’d be doing in Thailand, including visiting temples, going to an ethical elephant sanctuary, exploring nature in the depths of the jungle and learning about Thai culture.

Her request for 12 days off school during term time came back as unauthorised, but the duo still jetted off in May.

The pair travlled around the country
(

The pair jetted off in May
(

Keresna said: "Her confidence has improved, she’s using Thai phrases when chatting to the locals and can even count to 10 in the language.

"She’s 10-years-old and not doing GCSEs, A-Levels or any important exams, so I decided this trip was one we had to go on.”

Kerensa first tried alcohol and cannabis when she was just 13 in 1987.

The next 30 years were a blur of parties, booze and recreational drugs. She’d go on all-night benders to raves, squat parties, full moon parties and jungle parties.

Her partying days came to a halt when she fell pregnant at 37 in 2010, but Kerensa started drinking again after Delphi was born in August 2011 after a New Year’s Eve party.

From then, she would secretly drink wine to excess in the kitchen.

In 2019, when Delphi was six, Kerensa hit rock bottom. At the time, she was downing at least two bottles of wine a night while Delphi was in bed. She knew it couldn’t continue.

She said: "While I was drinking, my only focus was vino collapso at 4 pm every day. My brain was numb and my focus was to self-medicate and escaping thoughts of my awful childhood.

Kerensa recalls stashing her empty wine bottles in the shed
(

"Thankfully, Delphi was shielded from most of my drinking as I waited until she had gone to bed at 7pm, then I started guzzling the booze I had hidden in the kitchen.

"But I’d have to stash the empty bottles in the shed and then sneak them to the bottle bank in two plastic bags every week.

"My mornings were also horrendous until 4pm when the cycle started again. I couldn’t go on like this.”

Kerensa decided enough was enough so she gave up drinking, joined sober groups and ditched her ‘toxic’ friends.

She said it was very hard as she felt she had lost her best friend: wine.

But she knew she had to change – not only for her daughter but for her own future.

She said: "At first, I went to an AA meeting but quickly realised it wasn’t for me. However, I did get an insight into where I was headed in five years or so if I didn’t stop.

"Club Soda on Facebook was a group that really helped me – plus lots of sweets and watching box sets!”

After ditching booze and becoming sober, Kerensa decided she wanted to make things up to Delphi and decided on Thailand.

She had been before in her party days, but this time planned an incredible trip for Delphi, with amazing trips, jungle treks, rafting, massages, snorkelling and island hopping.

Kerensa revealed she wouldn’t have taken Delphi to Thailand during her active addiction stage – for fear of losing her, suffering hangovers in the heat and spending days in bed.

Now Kerensa wants to help other struggling with addiction
(

During their trip, they visited 'party alley’ Khao San Road as well as temples and enjoyed island hopping.

They also stayed at Chiang Mai Elephant Friends – an ethical elephant sanctuary in the jungle; it helped Kerensa let go of her guilt and find her new life purpose.

She believes her new life aim is to live a free life (free from the chains of addictions and hedonism) to enjoy life and make sure that her daughter has the best time.

She believes she wasted so much time with hangovers causing a lack of motivation, that now it’s time to get up and go on adventures.

Kerensa now enjoys solitude and time alone so she no longer needs to be the centre of the party.

Kerensa has been sober for more than two years now
(

She said: "Our three-week trip has been unforgettable. Delphi has been like a fish, spending seven hours in the pool and sea every day!

"We headed North on an overnight train, explored the jungle, ate incredible seafood, mixed with locals, went to markets, and saw some of the most beautiful beaches on idyllic islands.

"Plus, we picked up some bargains on a fun shopping trip. We were loving early mornings to see the monks fuelled by water and fresh juices – it’s so different doing it hangover free!

"We also celebrated 29 months of me giving up booze!”

While Kerensa’s goal for the future is clear – never have one drink again – she cannot believe the change in her daughter after their trip.

She described Delphi as a "new girl” and said they were best friends. Kerensa added: “Delphi’s confidence has improved tenfold.

"She’s been experimenting with street food, talking to people from foreign countries, made new friends with no computers or Nintendos in sight – we’ve had the best trip and it has all been worth it.

"Sobering up has been the best decision I ever made and now I can help others realise how great life without booze can be.

"I really regret being an alcoholic when my daughter was little, but I’ve worked so hard to better myself and to make things better for my little girl.

"All the money I saved by not drinking goes towards Delphi and adventures we can have together.

"Yes, there will be those who say I shouldn’t take her out of school during term time, but they don’t know me or what’s best for my daughter. We’ve had the adventure of a lifetime – and I’m now saving towards the next one!”

Previous : Vladimir Putin’s rumoured girlfriend given two new homes in NATO country, source says – World News
Next : Prince William’s medals and what they stand for as he turns 40 with Kate and kids