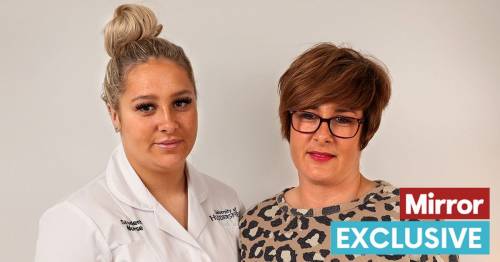 A mum and daughter who survived the Manchester Arena terror attack are both studying to become nurses.

Eve Senior was just 14 when she was badly burnt and peppered with shrapnel from the bomb blast in 2017.

A photo of the shell-shocked teenager limping from the scene, barefoot and bleeding with her jeans torn, was beamed around the world.

Days later, as she lay in bed at the Royal Manchester Children’s Hospital, surrounded by caring nurses, she vowed she would one day join their ranks.

And her mum Natalie, 44, who suffered shrapnel injuries, is at the same university, training to become a mental health nurse.

Eve being assisted by police after the terror attack
(

Both women are coming to the end of the first year of their degree courses.

Mum Natalie laughed: “We both started at the same time but I was not allowed to join in fresher’s week.

“She did not want to see her mum in the pub!”

Eve was leaving the Ariana Grande concert with her mum and younger sister Emilia, now 16, when suicide bomber Salman Abedi, 22, detonated his home-made device yards from them.

Thankfully Emilia was not badly injured but both Eve and her mum were taken to hospital.

Eve recalled: “I can remember being in hospital and I had two nurses in particular that I really got along with.

“I remember sitting in my hospital bed a couple of days after the attack thinking, ‘This is what I want to do. I want to be a children’s nurse’.”

She worked hard at school and earned a place at Huddersfield University in West Yorks.

But mum Natalie had also made a life-changing decision.

Together with her two ­daughters she suffered PTSD in the wake of the atrocity.

She said: “We had a lot of ­dealings with a lot of different mental health people and after a while I thought maybe it was something I could do.

“It shows how something as big as Manchester makes you re-evaluate everything.”

She did voluntary work in the sector and took access courses before she too booked her university place.

And after 17 years working with her husband Andrew, 46, at the family’s ­electrical and security business, she quit her job and took the plunge into a new career.

Eve admitted she had mixed ­feelings when she realised her mum would be joining her at the same seat of learning.

Smiling, she said: “Initially I was like, ‘oh, God’, but now it is quite good, we can do similar assignments.”

Natalie added: “We don’t really bump into each other on campus, we go in on different days really.”

Eve says her mum puts her to shame by handing in her coursework days ahead of schedule. “She always gets everything submitted on time and I’m always a bit last minute,” she laughed.

As we spoke, a two-day deadline was looming for a 2,000-word ­assignment.

Eve laughed: “Mum sent hers in last week and I’ve not even started it. Don’t tell my lecturers though!”

Natalie smiled: “We are not quite as sharp as we get older.

“I have to work at it where as she can do an ­assignment in a day that takes me a week.” The highlight of Eve’s first year has been getting to work on the ­children’s wards.

She added: “So far I’ve had a ­placement at Calderdale Hospital in Halifax, which I absolutely loved.

“On my first day, I found out my mentor was working in the ICU at Manchester Royal at the time of the attack, so we had a bit of a bond.”

Before setting off to work she had showed her mum her uniform.

“I tried it on with my mum and it felt a bit emotional but it felt good. I felt it was a big achievement. I always said I wanted to be a ­children’s nurse but I don’t know if everyone thought I would do it.”

She will also work at Pinderfields Hospital in Wakefield, where she has herself been treated.

Eve, who has had a series of ­operations over the years, requires further plastic surgery this month.

“It will be nice to go to Pinderfields because I still go there, I’m still having operations there,” she said.

On her 18th birthday Eve had a tattoo done of a worker bee behind her left ear. The bee, which represents Manchester’s industrial past, was adopted as a symbol of unity and ­defiance after the terror attack.

“Ariana Grande has got the exact same one,” she said.

Mum Natalie also has the tattoo and sister Emilia, a nursery nurse, is planning to have one done.

Eve had another tattoo on her forearm done earlier this year, showing the bee, the date of the attack, together with a floral tribute to the victims. Next week the family will remember the 22 people who died in the attack on May 22, 2017, when they visit the Glade of Light memorial, which is alongside Manchester ­Cathedral.

It was officially opened by the Duke and Duchess of Cambridge earlier this week.

Natalie added: “We always go over on the anniversary.

“It is a tough day but it will be a day we always mark.”

Previous : Jockey hits back after being questioned by fan over lack of effort on gambled runner
Next : EuroMillions results: Winning lottery numbers for Friday’s massive £14million draw