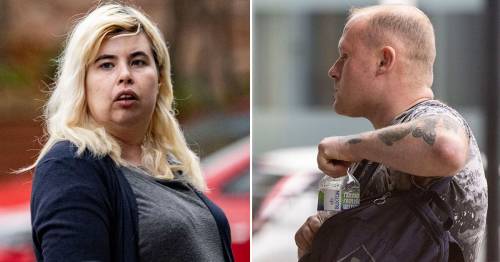 The parents of a tiny nine-day-old baby, whose life was 'literally shaken from her' by her ‘volatile’ mother and father, have been sentenced to a combined 18 years behind bars.

Ava Grace Nolan was found unresponsive by paramedics at her home in Nelson, Lancs, August 2017, and was later pronounced dead in Royal Blackburn Hospital.

A post-mortem examination later revealed the baby died of a catastrophic head injury, likely to have been caused by forceful shaking.

Ava had also suffered a separate brain injury, as well as a broken leg, which she is believed to have suffered in the days leading up to her death.

Her parents Sophie Nash, 31, and her partner Daniel Nolan, 30, blamed one another for the injuries sustained by their daughter in her short life.

But they were both found guilty by a jury of causing or allowing the death of a child after a trial at Preston Crown Court.

Nolan was today sentenced to 10 years behind bars for causing or allowing Ava's death while Nash will serve eight.

Both were also sentenced to three years for Ava's brain damage; 18 months for her fractured femur; and 12 months for cruelty to a child, with all sentences are to be served concurrently.

Sophie Nash, and partner Daniel Nolan, have been found guilty by a jury of causing or allowing the death of a child
(

Nolan has also been found guilty of causing or allowing serious physical injury to a child, relating to shocking injuries sustained by Ava in the days before she died.

Nash was also found guilty of the same charge and an additional count of cruelty to a person under 16.

He told the jury: “We make it absolutely clear to you that we cannot say who in fact did what.

Daniel Nolan, pictured, Nolan was also been found guilty of causing or allowing serious physical injury to a child
(

“We cannot say out of Nash or Nolan, who inflicted the injuries in this case, however the prosecution say that it was one of them and could not have been anyone else.”

When she was born on August 8, 2017, Ava was how you would expect a ‘fit and healthy’ newborn baby to be, the prosecutor said.

Midwives later attended at the house on the 12th, 13th and 14th and their entry was blocked on each occasion.

When the midwife could finally make contact, she was content Ava was happy and healthy, noting only that she had a slight yellow tinge about her, which could have been indicative of jaundice.

Daniel Nolan, little Ava's father, has been found guilty of causing or allowing the death of his daughter
(

Mr McLachlan added: “The prosecution’s case is that shortly after that visit, Ava sustained her first brain injury and also a fractured femur.

“In reality the next day was to be the last day of Ava’s life.”

On the 15th at shortly after 5pm, a police officer conducted a welfare check at the address having been contacted by concerned midwives and once again all seemed fine though it was noted baby Ava was whingeing.

Later that night Nolan called the Burnley Birthing Centre saying that Ava was not feeling well and that her ‘breathing wasn’t right’.

Officers were called to Dover Street, Nelson, by concerned paramedics
(

The midwife on the phone told Nolan to call an ambulance.

Paramedics arrived within moments to an unresponsive baby Ava who later stopped breathing.

Attempts were made both in the ambulance and later at the hospital to revive her but were unsuccessful. Ava was pronounced dead shortly after midnight on August 16.

A post mortem exam revealed two injuries to Ava’s brain, bruising to her body and a fractured femur.

Medical experts concluded the bleeds to her brain were most likely caused by shaking.

Mr McLachlan added: “The prosecution say that it is on them and they are responsible for her death.

“At least one of them caused the injuries and the other one knew.

“The final injury was to cause death when her life was literally shaken out of her. She really didn’t stand much of a chance.”

Speaking after the verdict, Det Ch Insp Jill Johnston from Lancashire Police, said: "Neither parent has ever accepted responsibility for harming Ava, with both Nolan and Nash blaming each other.

"Whilst we have been unable to prove which one inflicted those horrendous injuries which caused their baby daughter’s death, what we have been able to prove is that they are both ultimately responsible. One of them shook baby Ava to death and the other allowed it to happen.

"Neither of them sought medical assistance for the initial injuries that Ava suffered in those very short days of her life and I suspect that they delayed seeking medical help on the evening of her death, until it was certainly too late.

“Nolan and Nash were blessed with a healthy baby girl, a newborn baby who they should have loved, cared for and protected from harm.

"To think that they are responsible for her death is inconceivable.

"The couple admitted having an extremely volatile and violent relationship, exposing baby Ava to considerable risk, which ultimately proved fatal."