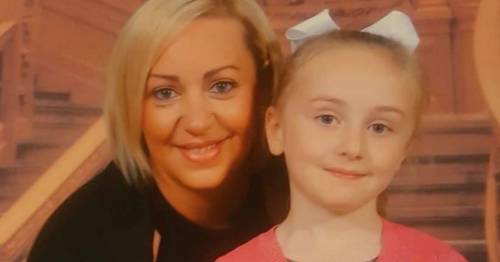 Mum, 43, dies during online meeting despite daughter, 9, fighting to save life

A much-loved mum died during an online work meeting as her petrified nine-year-old daughter tried to save her life.

Tragic Nicola Madden, 43, was on the conference call when she suffered a suspected heart attack on Tuesday afternoon.

Youngster Charlotte acted quickly to call her father Stuart McDougall, the LiverpoolEcho report, but the popular civil servant from Waterloo, Merseyside, could not be saved.

A GoFundMe page has been set up in in her memory and has raised £4,000 inside just 24 hours.

Devastated Mr McDougall said: "If you have a look at the GoFundMe or any of the online stuff you'll see that there's been a massive amount of responses.

Tragic Nicola died on Tuesday during an online work meeting
(

An online fundraiser has already attracted donations of £4,000
(

"She's touched a lot of people. I was with her for nearly 20 years, we have a nine-year-old daughter.

"We did split up but we were still very good friends. Most don't even have that luxury. It's still painful though. Nobody could ever say a bad thing about her.

"You don't meet many people like that now. She's worked at many places over the years so there are plenty of people in all these different workplaces that have come out and said how much they miss her."

He continued: "It's hard to put things into words. She was just a good character that every one well and truly liked."

Stuart has highlighted the impact the money raised through GoFundMe will have as "you don't make plans to put money away for your funeral in your 40s".

The milkman added "The amount of money raised speaks volumes. No one expects to die in their 40s. You don't make plans to put money away for your funeral in your 40s so this is a massive help off members of the public.

"Someone put in £500 yesterday. It's a business that chucked £500 in. It was a company that was affiliated with where she used to work. That's one workplace that's put that money in just like that. I don't even think she actually worked for them either.

"It's going to do a lot for the funeral."

To donate to the GoFundMe set up to help towards the funeral costs, click here.

Previous : 1 woman dead, 2 children injured in car crash with deputy chasing robbery suspect
Next : Mum confronts football ticket scammer who conned son out of £80 because ‘he is poor’