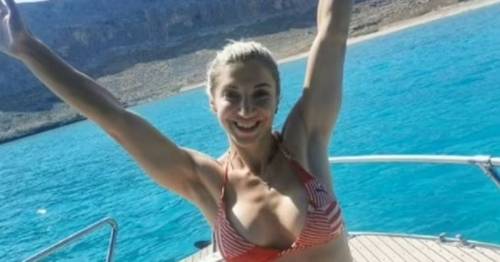 A mum who helped form a huge prostitution ring smuggling women into Britain boasted about how "brilliant" she was before being jailed.

She smuggled prostitutes into the UK and told them to 'look pretty' as the shameless pair lived a luxury lifestyle after working with other members of their own family to bring in sex workers.

The group arranged for mainly Romanian women to travel from their home countries and forced them to engage in off-street prostitution at brothels across the Midlands.

A court heard Dunn and Cojocaru began their operation in Northampton before expanding to Nottingham and Birmingham and were soon coining in £20,000 a month.

Dunn placed online adverts on a sex worker website to attract clients and was also responsible for sourcing the properties that would go on to be used as brothels.

Cojocaru sourced women from Europe to travel to the UK as sex workers and would do the day-to-day running of the operations.

A court was told she had wanted women to "look their best" and, when requesting semi-nude photographs, would tell them to "look sexy" and wear make-up.

Police recovered lists and text messages that showed that Cojocaru acted as the sex workers' "boss" having daily contact with them and keeping records of daily takings.

Dunn has been brought to justice after police swooped
(

Evidence showed that this amount was up to £1,640 per day of which the gang took 50 per cent from each woman between November 2015 and January 2017.

Dunn's elderly dad Martin Dunn, 74, was also involved in the plot as well as Cojocaru's brother Andrei Cojocaru, 26, Dunn Snr paid for airline tickets for women coming into the UK, would help collect them from airports and even financed hotels and serviced apartments.

Andrei Cojocaru was found with 12 mobile phones, seven of which had the names of the sex workers written on the back so he knew which booking was for which woman.

He would engage with clients and direct them to the property as well as topping up mobile phones and collecting the trafficked women from airports.

Dunn and Cojocaru, who lived in the posh village of Lower Harlestone, Northampton, where house prices average £900,000, were charged with trafficking women into the UK.

They both admitted two counts of conspiring to arrange or facilitate the travel of another person to the UK with a view to them being exploited for prostitution.

Dunn was sentenced to four years and nine months in prison while Cojocaru was jailed for three years and nine months at Northampton Crown Court. Judge Rebecca Crane said: "You exploited the labour of others for substantial financial gain and the business would have continued if it were not for police intervention."

Martin Dunn, of Northampton, was given a 12-month community order and 100 hours unpaid work for acquiring criminal property after coming into a large sum of money following a house sale.

Andrei Cojocaru, also of Northampton, was handed one year in prison, suspended for 14 months plus 150 hours of unpaid work for conspiring to control prostitution for gain.

The convictions, which were part of Operation Eton, were the first modern slavery and human trafficking charges secured by Northamptonshire Police Detective Inspector Carrie Powers said: "This was a very complex and lengthy investigation but I am really pleased that through it, we managed to secure the force's first charges under modern day slavery legislation and to get guilty results for all four offenders.

"This organised crime gang exploited vulnerable women with the false promise of a better life in the UK.

"Instead, they forced them to have sex with a large number of men with no regard for their rights or welfare.

"These women worked long hours, only to have a large proportion of their earnings taken by the gang which would then be used to fund luxury lifestyles.

"Investigating these sort of cases may be complex but Northamptonshire Police is absolutely committed to tackling modern slavery and bringing the people who exploit vulnerable members of our community to justice."