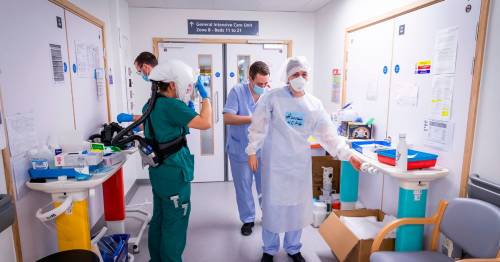 MPs will hold a vote later on whether to force the Government to reveal the true extent of NHS staffing shortages.

The proposed amendment to the Health and Care Bill would mandate the NHS to conduct and publish independent analysis of staffing need to cater for health demand in the country.

Currently there are no estimates as to how many medics are being trained in the pipeline to meet estimated future demand.

The amendment has been proposed ex-Health Secretary Jeremy Hunt – now chairman of the powerful Health and Social Care Committee.

It would force the Government to publish independent workforce projections twice a year to ensure the pipeline of clinical staff in training meets future demand.

Mr Hunt said: "Last week the Prime Minister committed to ‘look at the idea’ – backed by every major NHS organisation in the country and every opposition party – of independent workforce training estimates to give hope to burnt-out NHS staff that we are training enough frontline staff for the future.

"Today we will hear the Government’s response. Warm words will not be enough.

"Ignoring the cries from frontline staff everywhere about the current workforce crisis will risk both patient and staff safety.

“After three lockdowns to protect NHS capacity, surely it’s time to learn the lesson that we need to match supply with demand, and once and for all make sure we’re training the number of doctors and nurses we need for the future.”

There are around 100 NHS staffing vacancies in England.

The Health Foundation projects an extra 4,000 doctors and 17,000 nurses will be required to clear the backlog.

Nowhere near the amount deeded are thought to be in the pipeline, with doctors and nurses taking years to train.

Full time equivalent GP numbers are actually falling as more leave or cut their hours than join the workforce.

Royal College of Physicians data published last week revealed there has been a 33% increase in unfilled consultant posts across the UK since 2013.

The cross-party amendment is supported by nearly 50 of the UK’s most prominent health and care organisations, and 38 MPs – half of whom are Tory.

They include eight select committee chairs and all the opposition parties.

Asked why the Government was reluctant to conduct staffing analysis, he said: “I fear it’s because Government know that an honest, independently verified, analysis of NHS workforce needs will show there is a massive gap… and therefore a significant extra funding need.

“So some (eg Treasury) want to avoid the analysis to avoid showing the funding need.”