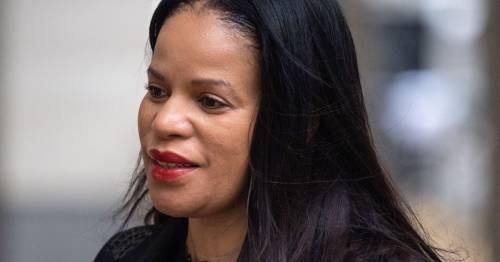 Suspended Labour MP Claudia Webbe has been found guilty of harassment after threatning to throw acid at her boyfriend’s female friend because she was jealous of their relationship.

The 56-year-old, who sits in the Commons as an independent, was convicted after a trial at Westminster Magistrates' Court.

Magistrates heard she made the threats to 59-year-old Michelle Merritt in a string of phone calls between September 1 2018 and April 26 last year. She also said she would send naked pictures of Ms Merritt to her family.

Webbe's conviction could mean a by-election in Leicester East if magistrates hand the MP a prison sentence.

The court heard how, in one call, Webbe called Ms Merritt “a slag”, threatened her with acid and said she would send naked pictures and videos to her daughters.

In another call, recorded by the complainant, Webbe is heard telling the victim to “get out of my relationship” some 11 times.

Webbe, from Islington, north London, denied harassment, claiming she only made “courtesy calls” to warn Ms Merritt not to breach coronavirus regulations by meeting Lester Thomas.

“I do not find the defendant to be cogent, compelling and truthful in all aspects of her evidence,” he said.

“Some of the things she said I believe were made up on the spur of the moment.”

He added: “In short, I find Ms Webbe to be vague, incoherent and at times illogical and ultimately I find her to be untruthful.”

Mr Goldspring adjourned sentencing to November 4 and released Webbe on unconditional bail, but warned her she could face prison.

“Threatening to throw acid at somebody and to send intimate photographs to family members crosses the custody threshold,” he said.

Her lawyers said she will appeal against the conviction and Webbe added in a statement: “I am deeply shocked by today’s verdict.

“I am innocent and will appeal this verdict.

“As I said in court and repeat now, I have never threatened violence nor have I ever harassed anyone.”

Webbe, who entered the Commons in December 2019 after winning the seat formerly held by Labour veteran Keith Vaz, was living with Mr Thomas at the time of the allegations.

The couple arrived at court holding hands and he sat in the public gallery throughout the hearing.

Ms Merritt said she had known Mr Thomas for more than 15 years and they were “good friends”, having previously dated.

The prosecutor said Webbe made a series of silent phone calls from a withheld number before the “harassment escalated” on Mother’s Day, March 31 2019.

Giving evidence from behind a screen, Ms Merritt earlier said Webbe told her she was “Lester’s girlfriend” in an “angry” call, culminating in ‘You’re a slag and you should be acid’.

“She confirmed she knew where I lived and would send pictures and videos to my daughters,” she said.

Mr Goldspring said he was satisfied Webbe had “threatened to throw acid at Ms Merritt”, adding: “I find she was jealous of the relationship between Lester and Michelle, whatever the nature of that relationship, she certainly thought it was something she was not happy with.”

Ms Merritt complained to police, who warned Webbe not to contact her, but the calls continued.

Webbe claimed she was in an argument with Mr Thomas at the time and had been referring to a picture of him “naked from the waist up” taken while he holidayed in St Lucia.

She said she was telling Ms Merritt to get of the relationship in the context of an “inappropriate bubble” during lockdown.

But Mr Goldspring described her explanation as “frankly incredible and unbelievable”.

Webbe claimed she was the victim of “domestic abuse and coercive control” and said she was being “goaded and gaslighted” during the row, which resulted in police being called after a neighbour reported her screams.

During the call, Mr Thomas can be heard asking his partner: “Are you mad?”

Prosecutor Susannah Stevens suggested to the MP the comment was made “because you had gone mad”.

Ms Webbe entered the Commons in the December general election, winning the Leicester East seat formerly held by Keith Vaz, the Labour veteran who retired from Parliament in the wake of a scandal.

Ms Webbe who is also a councillor in Islington, north London, was a member of Labour's ruling National Executive Committee.

Before becoming an MP she was a political adviser to then-London mayor Ken Livingstone.

Previous : Tory peer who lent Boris Johnson holiday home is scrutinised by his own brother
Next : Prince William gives rare update on Prince Louis and jokes that he ‘lives outside’