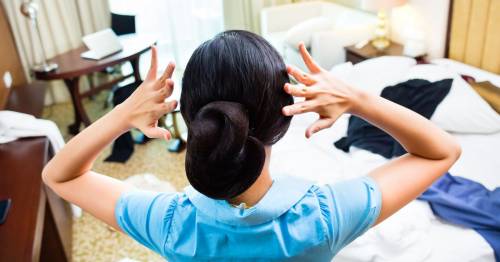 While Airbnbs can be a cheap way to travel to dreamy places, you never quite know what's going to be waiting for you behind that door.

The majority of the properties are gorgeous homes that look just like the photos, but there have been a few horror stories over the years which can make travellers a bit nervous.

But mum Ruth Ibegbuna was left absolutely furious when she arrived at her Airbnb with her young daughter to find it hadn't been cleaned – with dirty bedding, beer bottles and filled ashtrays everywhere.

She put her daughter to sleep on the sofa and took photos as proof for her complaint before setting to work scrubbing the place.

Until she realised she had made a terrible, terrible mistake – and she was forced to make a speedy exit before things got very, very awkward.

She was really disappointed when she opened the door
(

Sharing the story on Twitter in a thread that has since gone viral, Ruth, from Bradford, explains: "Arrived in Italy late last night. Disappointed by an unlocked Airbnb flat that hadn't been cleaned/tidied after the host seemed fab. Meticulously took photos for feedback & irritatedly started tidying up at 1am.

"I'd brazenly broken into an Italian family home at 1am. With a 3yro. Put my snoring daughter on their couch. Photographed evidence of their slovenliness (fags & beer) . Used their loo.

"All with no one waking OR saying a word. (Probably cowering behind a door & phoning police).

"I then had to pick up [my daughter] and attempt to leave quickly & quietly. Try to put the mess back in the right place. Wash up my cup. Go next door and then use Google translate to write a long snivelling apology to the family and try to explain myself. Put it under their door at 2am."

What would you have done in this situation? Tell us in the comment section below.

Ruth, who founded the RECLAIM Project, later explained that it was the furniture that finally sparked the realisation she was in the wrong place.

She said: "I went back onto the Airbnb listing because the furniture looked different to what was advertised. Then realised we were in the wrong place and re-read his instructions that were very clear about WHICH actual front door it was."

The story left people on Twitter in stitches, and they couldn't believe the pickle she ended up in.

One wrote: "I literally love that you took the time to wash up your cup. That is the most British thing I think I've ever heard. Please tell me you'd made yourself a cup of tea."

A second commented: "I’d have just left the tidying up and not said a word. Can you imagine them in the morning? Waking up to a tidied house and not knowing what on earth was going on!!"

Another joked: "I would be frankly thrilled if someone broke into my house at 1am and tidied it and then quietly left."

Do you have a story to tell? Email yourmirror@mirror.co.uk

Previous : Mum thought her pregnancy symptoms were Covid then gave birth to ‘miracle’ twins
Next : Brit engineer ‘knows where missing MH370 plane is’ – but says some ‘don’t want it found’ – World News