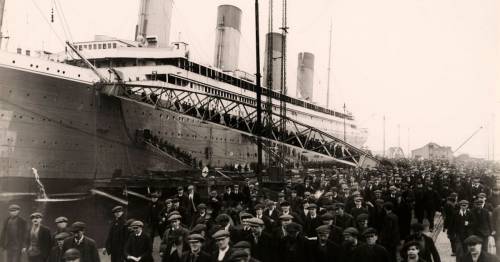 The story of Titanic is known to many, the huge RMS ship left from Southampton to New York City but struck an iceberg and eventually sank.

Approximately 1,500 people died, and funeral director, Caitlin Doughty – also known as YouTuber Ask a Mortician – answered the question that's on all of our minds…where did the bodies actually go?

In her video she said: “So we have 1,500 deceased people, to start, how many of them actually went down with the ship, sucked down over two miles to the sea floor?

“How many of them managed to make it up to the surface in their life jackets, only to die within 15 minutes of hypothermia in the 28 degree water?

“How many died from injuries from the breaking parts of the ship? We’ll never know the exact numbers, but we do know in total about 340 bodies in total were recovered.”

That means that 1,160 bodies were never seen again, so Ask A Mortician dug a little deeper.

Firstly she looked at CSMackay-Bennett, a recovery boat that ended up finding the majority of the victims of the tragety.

She continued: “The recovery boat didn’t leave Nova Scotia until three days after the wreckage, and didn’t arrive at the site until a full week later.

340 bodies were recovered through lifeboats, with 1,160 bodies never to be seen again
(

“By this time, bodies had scattered and been exposed to the elements like sea life and birds, so the men didn’t find pristine preserved corpses floating on the surface."

According to Caitlin, many of the bodies did cluster together “like a flock of seagulls in their white life jackets”.

The first day, they recovered 51 bodies, and in total, the Mackay-Bennett recovered 306 bodies.

Because of this, it would be impossible to figure out how many people sank to the bottom of the ocean or floated away.

In terms of the actual bodies that were found and too disfigured for identification, they were simply wrapped in canvas and weighed down with iron bars to be thrown back into the ocean.

They did this with 166 bodies, and the ones that were more recognisable, were embalmed and put into coffins on the rescue ship.

She continued: “The funeral home in Nova Scotia dealing with all this used the local curling rink as a temporary morgue.

“In Halifax, there are 150 people buried that have sadly never been identified.”

As for the people that were trapped inside the ship, the answer is supposedly “controversial” and “unclear."

Caitlin explained: “Let’s assume that most of the bodies were exposed to normal deep sea currents.

“Those currents would bring in fresh oxygen that would decompose the bodies, and deep sea scavenger animals like worms and fish that would eat the bodies.

“Those bodies would likely be long gone."

She concluded: “In terms of those trapped deep within the ship, like the engine room with no oxygen or scavenger animals, it’s possible there could still be remnants of the body."

We may never know what happened to all of the bodies onboard the RMS Titanic, but there is still much controversy and opinion surrounding the rescue mission today.