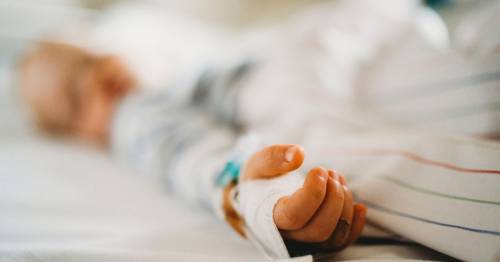 More infant children are ending up in hospital with Omicron, the Government has been warned.

NHS data discussed at a Sage meeting last Friday has flagged an “early signal” that the variant may be causing more severe symptoms in those aged under one.

However Britain’s leading paediatricians insist it is too early to confirm this, as the increase in child hospitalisations may be caused by more infants being referred by increasingly cautious medics.

Hospital data from December 14 to January 12 shows 42% of Covid patients under 18 admitted were aged under one.

This is an increase from 31% during the pandemic up to December.

However the data shows that of those aged under five seen in hospital last month, fewer were seriously ill or needed oxygen treatment.

Prof Russell Viner, of University College London and Sage member, told a media briefing: “There’s potentially some evidence that this variant is affecting the upper airway is more than previous variants. Children have much smaller upper airways.

“I think we need to be careful in suggesting that it’s all down to that.

“It may be that this variant is more likely to cause a little bit of fever or some upper respiratory cold like symptoms in younger children than previous variants, which have largely been asymptomatic or had no symptoms.

“However the way we protect children through the NHS with our decision making algorithms will potentially push more children to hospital. And I think we’re seeing some elements of that.”

Four out of five Covid babies were sent to hospital to be checked over suffering with a fever or cough, which NHS 111 call handlers are instructed to advise. Many were given antibiotics as a precaution against serious bacterial infections.

Dr Camilla Kingdon, president of the Royal College of Paediatrics and Child Health, said: “I want to make light of this because clearly there is going to be parents who are worried about this.

“But for paediatricians, this is absolutely our bread and butter kind of work.

“So the febrile, unwell baby, we are super geared up for that kind of clinical presentation.

“I’m very confident that even if we saw a rise from the current level of [child admissions], the NHS would be able to cope.”

The alert comes in the latest round of the ‘ISARIC4C’ study which was submitted to the Government’s Scientific Advisory Group for Emergencies (SAGE), which feeds its findings to ministers.

It looked at 405 hospitalisations of under 18s from December 14 to January 12.

ISARIC4C is a UK-wide consortium of doctors and scientists established to provide the Government with rapid evidence during an emergency.

Its findings are preliminary and are yet to undergo detailed analysis.

Scientists stressed that there had been early evidence suggesting previous variants were causing more severe infections in children but this later proved not to be the case.

Prof Christina Pagel, of University College London, said: “The absolute number of hospital admissions in children of all ages have been going up steeply since the Omicron wave but this analysis provides a lot more detail.

“It is obviously concerning that significantly more infants under one are being admitted to hospital than previously.

“This cannot be explained just by vaccination status or high community prevalence, since the same is not true for instance of one to four-year-olds.

“Reassuringly babies are not needing to stay long in hospital once admitted.

“It is possible that Omicron’s preference for upper airways is affecting young children more, even while it reduces burden in adults and older children.

“We urgently need to understand more about what might be causing this increase.”

Previous : 5 worrying Omicron symptoms that could put your life in danger, according to doctors
Next : Brazil poll shows Lula gaining over Bolsonaro, third candidate ’embryonic’