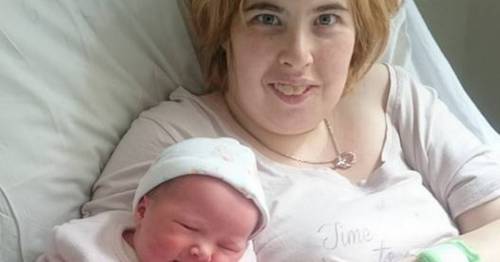 Monster mum, 31, cradles her newborn daughter days before she was shaken to death

The evil mum of a newborn baby who died from catastrophic head injuries after having the "life shaken out of her" was pictured cradling the infant just nine days before her tragic death.

The wicked couple were sent down for a combined 18 years in prison at Preston Crown Court, where jurors heard how little Ava had the "life shaken out of her".

A chilling photo taken moments after Ava's birth shows Nash – who has autism, cerebral palsy and epilepsy – cradling the infant loosely as she stares intently into the camera.

Just eight days later on August 16, 2017, police were called to an address in Nelson, Lancashire to reports of an unresponsive child.

Paramedics rushed the tiny baby to Royal Blackburn Hospital but she couldn't be saved and died shortly after midnight on August 17.

A post-mortem revealed she'd sustained a catastrophic head injury which was the ultimate cause of her death and likely caused by forceful shaking.

But that injury was not the only abuse Ava suffered in her short life.

She had a separate brain injury and a broken femur – which were thought to have been inflicted in the days prior to her death.

The cruel parents were "volatile and abusive" and consumed with their own destructive relationship – which they put before the safety of their just-born child.

Around her crib in their chaotic and squalid home, Nolan smashed glass panels and Nash would snatch up Ava by her babygrow – causing her head to flop around unsupported, The Sun reports.

Speaking after the sentencing, Det Ch Insp Jill Johnston from Lancashire Police, said: "I am pleased that Nolan and Nash have both been jailed, particularly as both have continued to blame each other and neither has ever accepted any responsibility for the acts of violence that led to baby Ava's death.

Nash's partner and Ava's cruel dad Daniel Nolan, 30, was also imprisoned for 10 years for his part in the child's death
(

"Ultimately their selfish preoccupation with themselves, combined with their toxic and volatile relationship, has resulted in their baby losing her life.

"I would again like to thank all of the officers and staff who worked on this incredibly complex and emotive case, always with the aim of getting justice for baby Ava, as well as the witnesses who gave evidence and supported this investigation.

"We will continue to work hard with our partners to protect children like baby Ava from harm, to educate and support parents, but ultimately to protect and safeguard children, to be their voice and to prevent tragic cases such as this."

Preston court heard how the pair repeatedly ignored professional support from midwives and health visitors and blamed each other for Ava's death.

Earlier this week, the prosecution told Preston Crown Court Ava "didn't stand a chance" in the care of her "volatile and abusive" parents.

Mr McLaughlin QC said the prosecution could not say which of Ava's parents caused her injuries, but said there is "an inbuilt parental responsibility to protect a child" and they did not do that.

"One of them caused those injuries. The prosecution says the other knew.

"The final injury, her life was literally shaken out of her. She really did not stand a chance."