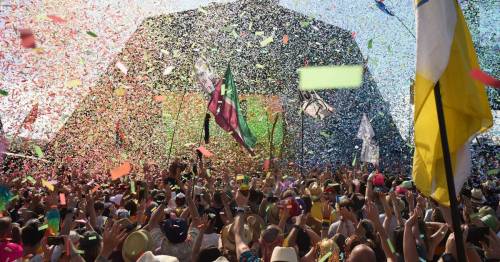 Monkeypox warning: Brits heading to Glastonbury urged to watch out for symptoms

Health chiefs have issued a monkeypox warning for Brits heading to Glastonbury and other festivals to keep a wary eye out for symptoms as they enjoy themselves.

The UK Health Security Agency (UKHSA) today reminded people heading to festivals and summer events to watch out for the virus.

This came as they announced another 46 cases had been detected in England, along with three more in Scotland and another in Wales.

As of yesterday, this brings the total number of confirmed cases in the UK to 574.

The body's warning comes ahead of next week's festival, one of the highlights of the music calendar.

Health chiefs cautioned festival-goers to keep an eye out for the symptoms particularly if they have had multiple or new sexual partners.

The main symptoms of monkeypox
(

They said that anyone can catch monkeypox but it was particularly prevalent amongst men who are gay, bisexual or have sex with other men.

The most prominent symptoms of the virus include a rash or blisters.

Dr William Welfare, Incident Director at UKHSA, said: “As case numbers of monkeypox continue to rise and with many summer events and festivals ahead, we’re reminding people to be aware of the symptoms of monkeypox, particularly if you’ve recently had new or multiple sexual partners, to help prevent further spread and protect others.

“If you have a rash with blisters, or any other monkeypox symptoms, don’t go to events, meet with friends or have sexual contact.

“Instead, stay at home and contact 111 or your local sexual health service for advice.

"Please contact the clinic ahead of your visit and avoid close contact with others until you’ve been seen by a clinician.

“UKHSA is working closely with partners across the country, including event organisers and venues, to raise public awareness of monkeypox symptoms so everyone has a safe, happy and healthy summer.”

England leads the way with the vast majority of the UK’s cases with 550 confirmed cases, Scotland has only 16 with six in Wales and two in Northern Ireland.

The UKHSA advised the following people to contact a sexual health clinic:

The virus is not a new one and has existed in the Democratic Republic of Congo since the 1970s but in recent months it made the leap to Europe and the west, causing alarm.

So far, there have been no reported fatalities from the virus.

In recent months the virus has been identified in several countries across the west, including Britain, Italy, Portugal, Spain, Canada and the United States.

Previous : Ex-soldier Collin Reeves guilty of murdering neighbours while kids slept in parking row
Next : Health warning: One person dies from TB as three others infected in UK outbreak