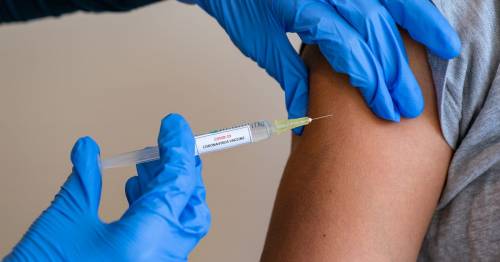 Gay and bisexual men at higher risk of exposure to monkeypox will be offered a vaccine to help control the recent outbreak of the virus.

It comes as the number of monkeypox cases in the UK has risen by 219, with the UK Health Security Agency (UKHSA) having confirmed on Tuesday that the total number of confirmed cases now stands at 793.

Now, a new vaccination strategy published by the agency recommends offering the smallpox vaccine Imvanex, to men considered to be at higher risk of exposure.

Imvanex has been shown to be effective against monkeypox.

While anyone can contract monkeypox, data from the latest outbreak shows higher levels of transmission within, but not exclusive to, the sexual networks of gay, bisexual and other men who have sex with men.

A monkeypox patient with visible skin eruption due to the virus
(

Though the virus is not currently defined as a sexually transmitted infection, it can be passed on by close and intimate contact that occurs during sex.

The UKHSA strategy has been endorsed by the Joint Committee on Vaccination and Immunisation (JCVI), which was consulted on the eligibility criteria for the vaccine.

The eligibility criteria would be similar to that used to assess those eligible for HIV pre-exposure prophylaxis (PrEP) – however would be applied regardless of HIV status.

A clinician may advise vaccination for someone who, for example, has multiple partners or attends ‘sex on premises’ venues.

Details on how eligible people can get vaccinated would be set out by the NHS in due course, with the health body advising people not to come forward for the vaccine until contacted.

Dr Mary Ramsay, Head of Immunisation at UKHSA, said: “Our extensive contact tracing work has helped to limit the spread of the monkeypox virus, but we are continuing to see a notable proportion of cases in gay, bisexual and other men who have sex with men. By expanding the vaccine offer to those at higher risk, we hope to break chains of transmission and help contain the outbreak.

“Although most cases are mild, severe illness can occur in some people, so it is important we use the available vaccine to target groups where spread is ongoing.

“In the meantime, everyone should continue to be alert to any new spots, ulcers or blisters on any part of their body, particularly if they’ve had close contact with a new partner. If you think you have these symptoms, avoid close contact with others and call NHS 111 or your local sexual health centre, though please phone ahead before attending.”

Robbie de Santos, Director of Communications and External Affairs at Stonewall said while anyone can watch the virus, the group welcomed the vaccine being offered to those gay and bi men who were currently at a higher risk.

“It is important that gay and bi men get the vaccine when offered to protect themselves and others," he added. "Let’s help get the outbreak under control so we can all have a safe and happy pride season.”

The South East and North West have the next highest figures.

So far 99 per cent of those diagnosed with the virus are male, with just five confirmed female cases, the UKHSA said in its latest daily update.

The number of confirmed cases by region are:

The agency said the location of 142 cases is still under investigation.

In this afternoon's update the UKHSA said: "Cases of monkeypox infection were confirmed in England from 6 May 2022.

"The outbreak has mainly been in gay, bisexual, and men who have sex with men without documented history of travel to endemic countries."

The virus, which was first found in humans back in 1970, has been detected in 35 countries where it is not endemic in the past month.

Monkeypox has been linked to 66 deaths in Central and West Africa, where it is classified as endemic, since the start of the year.

It can also be spread via contaminated objects such as linen and soft furnishings.

Guidance issued by the UKHSA urges people to try and eat and sleep in a different room from those they live with if possible.

It says: "Where the use of a separate room isn’t possible, cases should avoid physical contact and keep at least 3 steps (1 metre) away from all household members.

"It is particularly important that they avoid close contact with young children, pregnant women and immunosuppressed people as they may be at higher risk of serious illness."

Those diagnosed with monkeypox and highest-risk contacts should isolate at home, the guidance says.

Previous : Mum, 37, and five-year-old son found stabbed to death in suspected double murder
Next : Queen ditches her walking stick as she receives award for her ‘unstinting service’